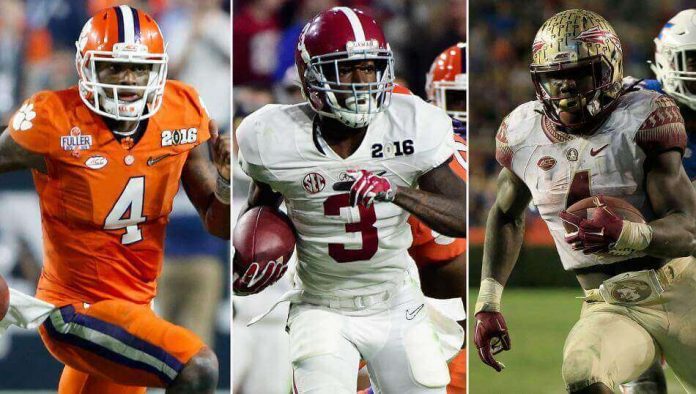 Just last week, Week 1 college football odds were released. Now, bettors can wager on how many wins their favorite NCAA football team will accrue in 2016.

Last season, Ohio State topped the charts for regular season win totals at 10.5 wins. No one is quite that high this year, but Clemson, Florida State, Oklahoma and Tennessee are all tabbed at 10, insinuating that these are the four teams that the books feel have the best chance to reach the 2016 College Football Playoff.

Of course, we know that both Clemson and Florida State won’t get there, and that’s what could open the door for the next few NCAA teams in line: Alabama, LSU and Michigan, all at 9.5 wins.

Maybe the most surprising number is Houston sitting at just nine wins. Many believe the Cougars could be on their way to the College Football Playoff this year, though of course, they’ll have to run the table in order to do that.

The non-conference schedule for UH starts off with a very tough game against Oklahoma, but aside from that, there are relatively sure-fire wins coming against Lamar and Texas State. A game against Louisville at home is definitely winnable to boot.

Let’s not forget that Greg Ward Jr. is on the short list of legitimate Heisman Trophy candidates. He was amazing against Florida State’s vaunted defense in the Chick-Fil-A Peach Bowl last season, and if he’s anywhere near that good again this year, Houston could be headed back to the New Year’s Six with ease.

We can’t imagine that this team won’t win at least seven games in AAC play, and that parlayed with a 2-2 mark outside of conference play will be good enough to get the Cougs to at least the nine wins required to push. College football betting is gaining more popularity, thanks to this type of opportunities.

Meanwhile in the SEC, three teams are lined at least at 9.5 wins. Inevitably, at least one of Tennessee, Alabama or LSU will reach double-digit wins, but we’re not sure that all three really have the ability to do so.

Alabama has a neutral site game against USC to deal with this year, and it has to visit both Neyland Stadium and Tiger Stadium this year, not to mention Ole Miss and Arkansas as well. For as great as the Crimson Tide are year in and year out, this is a really tough road to sow to get beyond 9.5 wins.

LSU wasn’t done any favors with its schedule either. Even if you go with the assumption that the Tide do lose in Baton Rouge, the Tigers will need to beat Wisconsin in a de facto road game in Green Bay along with Florida, Auburn, Texas A&M and Arkansas on the road.

In fact, the best team of the bunch could be the Volunteers. Sure, it’s been awhile since the SEC East has had a dominant team, but we have no doubt UT is going to be heading to Atlanta this year as long as it takes care of business against Florida and Georgia early in the conference season.

That’s the time to get those two teams though, as the Dawgs will still be getting used to life beyond the Mark Richt era, while Florida might still be looking for its starting quarterback by the end of September.

If those two games are won, we’re not sure where else the Vols are losing. They do have to play Alabama, but that game is at home, and you know the atmosphere is going to be electric at Rocky Top for that tussle.

If Tennessee gets to its bye on October 22 at 6-1, as we figure it will, the coast could be clear. From that point forward, the team has to play against South Carolina, Tennessee Tech, Kentucky, Missouri and Vanderbilt. We can’t see this team only winning nine games this year.

The 2016 college football season kicks off August 26 with California and Hawaii playing in the first ever game to be played on Australian soil. The rest of the nation will begin its play on Thursday, September 1.

Which teams should you follow in the 2016 college football season? Check out the teams to watch for the playoff in College Football Playoff Odds and 2016 Picks