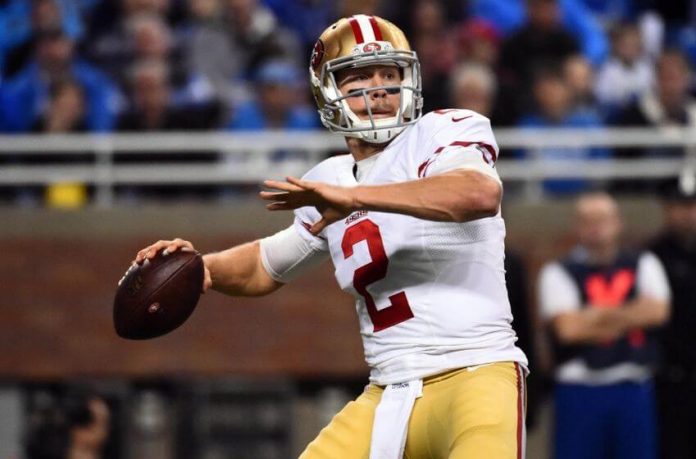 Position battles are all the rage in the NFL preseason. Veterans who have had their jobs for years are pushed every season by incoming rookies and free agents, and depth chart wars play themselves out for the start of the season over the course of this next month.

Generally speaking, bettors don’t care all that much about the battle to become the backup right guard, but in the NFL, the quarterback is king. Several teams have quarterback question marks heading into the 2016 NFL season. Check out the latest odds on who will emerge to lead their team as the starting pivot in NFL Week 1.

When a team trades up to the No. 1 pick in the NFL Draft, the man it is going for is usually expected to start right away and make a big impact on the franchise. Of course, the last time the Rams picked No. 1 overall, they selected Sam Bradford, a man who really never did pan out and was always hampered by injuries.

Now, the newly relocated Rams are banking on Jared Goff to be the man to lead this franchise. Picking Goff made all the sense in the world. He’s a local kid having gone to college at Cal, and he’s got the tools to step in and start right away.

That’s why oddsmakers like BookMaker originally installed Goff as a -1150 favorite in the football betting odds to take the opening day snap for L.A.

However, the Rams still do have an incumbent quarterback. Case Keenum is obviously not the long-term answer, but he didn’t play poorly last year and has certainly made a case to start for this team again.

If Goff doesn’t have a great preseason, Keenum could be used as a placeholder, if nothing else. That’s why this quarterback battle has suddenly gotten a little more interesting. Originally lined as a +625 dog to start on opening day, Keenum is now set at +240.

Is there a competition for NFL quarterbacks that truly means less than the one in San Fran? Remember when Colin Kaepernick was one of the up-and-coming superstars in the NFL? Heck, remember when he damn near won the Super Bowl for the 49ers just a few years ago?

Now, Kaepernick is merely fighting for his job against Blaine Gabbert.

Gabbert replaced Kaepernick last year, but now that Chip Kelly has come to the Bay Area, the starting job is wide open once again.

The common thought is that Kaepernick’s skill set works better with Kelly’s offense than Gabbert’s does, and that’s why the Nevada product is a -180 favorite to win this job. Still, at +140, Gabbert isn’t far off, and it wouldn’t be all that shocking if either man won this job.

How often do you see the defending Super Bowl champs not know who their quarterback is going to be at the start of the next season? Peyton Manning retired. Brock Osweiler went to Houston. And now the Broncos are left with Trevor Siemian, Mark Sanchez and Paxton Lynch. Yuck.

Denver traded up to get Lynch in the first round of the NFL Draft, and though he’s clearly the long-term answer under center for the Broncos, whether he’s truly ready to lead a Super Bowl caliber roster is another question.

The reason why Lynch opened up as the favorite to win this job at +115 though, is because he’s clearly the only even remotely capable quarterback to win a Super Bowl.

Sanchez, though, has gone from a +190 second choice to the +120 favorite because he’s just flat out more ready to play in this league and has guided teams to the playoffs in the past.

In an ideal world, the Broncos would probably love to let Lynch sit for the year and learn the game before throwing him to the wolves. He’s listed as the third quarterback on the depth chart now, but it only takes one or two really good performances in the preseason to change everything.

Keep in mind as well that Siemian is still listed as the co-starting quarterback on the depth chart in Denver. He might actually be the sharpest choice of the bunch of potential NFL starting quarterbacks at +300 after opening at +285.