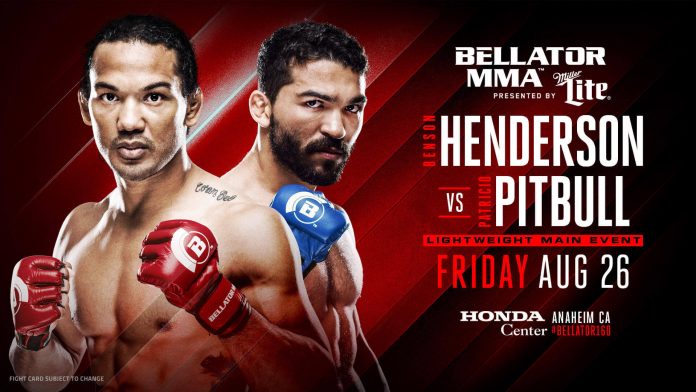 Of all the UFC alums to cross over into Bellator MMA, Benson Henderson is the most highly regarded. What separates “Smooth” from other high profile signees like Phil Davis, Josh Thomson or even Tito Ortiz, is that Henderson is a former champion who is still in his prime. Nobody in Bellator carries that type of credential.

Consider Henderson a walking litmus test for the rest of the Bellator roster. Any lightweight who beats him can easily claim that they’re one of the best in the world. After all, this is the same fighter that laid waste to Nate Diaz, beat Frankie Edgar twice and eked out a win against Gilbert Melendez.

This Friday, Henderson will meet one of Bellator’s true homegrown stars: former featherweight champion Patricio “Pitbull” Freire. The Brazilian is 8-1 in Bellator and has produced some of the promotion’s most memorable fights to date. Not only will he get a chance to prove that he can hang with the UFC’s best, but he could help legitimize Bellator as an organization with top-tier talent.

Any card with Henderson is going to be a big deal for Scott Coker and Co., which is why the rest of the main card is filled with intriguing fights and promising talents. Let’s take a look at your main card options for betting on fights, with the Bellator odds courtesy of BookMaker.eu.

Though Henderson has had a highly successful career, he’s been derided as a points fighter. There is some truth to that, as 12 of his last 15 fights have gone to the final bell. Nearly half of his 23 wins have come by decision, and a few of those were highly contentious wins that many felt he should have lost.

But “Smooth” might be forced into a kill-or-be-killed against the ultra-aggressive Freire, who has 19 stoppage wins in 25 career victories. His highlight reel is filled with sensational KOs and impressive submissions alike, so he is dangerous at Bellator just as he is in UFC betting.

Two-time NCAA All-American wrestler Bubba Jenkins goes for revenge against Georgi Karakhanyan, who submitted “The Highlight Kid” in January 2015. Jenkins comes into the bout with three straight wins, most recently notching a unanimous decision against Goiti Yamauchi this past March.

Karakhanyan has lost two straight for the first time in a 31-fight career. But his lethal submission skills make him an intriguing matchup for a decorated wrestler like Jenkins. He currently has 18 stoppage victories in 24 career wins, with 14 coming by way of submission.

An undefeated fighter will always draw interest in the fight odds, even if you’re only four fights into a career. But in McKee’s case, all of his wins have come by way of first-round stoppage – three by KO, and one by submission. Bellator could have a star on its hands.

Corrales was once in McKee’s position, starting his pro career 12-0 with 10 stoppages. But his move to Bellator killed his buzz as he lost three straight. We can forgive two of those losses, as one was to champion Daniel Straus and the other was to the headlining Freire, who is a perennial contender. Now, Corrales has a chance to play spoiler.

As the elder brother of former UFC lightweight champion Lyoto Machida, Chinzo has a famous surname to live up to. But so far, his involvement in pro MMA can only be described as dabbling. Although Chinzo signed with Bellator in 2014, he has yet to actually make his debut.

Bellator is treating him with kid gloves, pitting him against Mario Navarro, who also hasn’t fought since 2015. The 33-year old is just 1-4 in his past five and is likely being brought in to give Machida a win. But that’s not a guarantee, considering the fact that Chinzo has just five pro fights and is already 39 years old.

What are the other top UFC and MMA events for this weekend? Check out UFC Picks on Fox 21: Demian Maia vs Carlos Condit