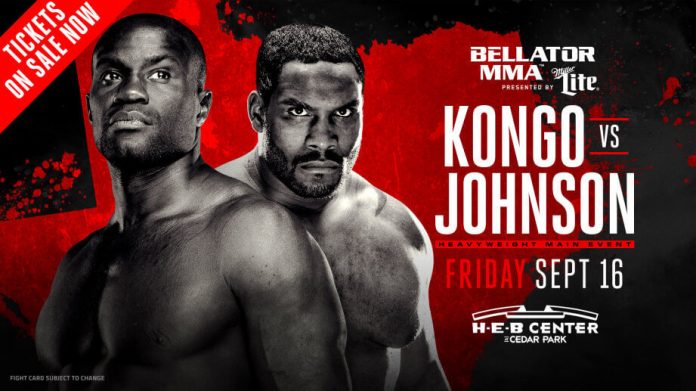 It’s a good night of action from the Heb Center in Cedar Park, Texas. You can catch the action on SpikeTV starting 9 p.m. ET. Let’s go over your options to bet on fights:

It seems like ages ago that Cheick Kongo made his UFC debut as a fearsome kickboxer. He’s always had the look, with a chiseled, muscular 6’5” frame. But he’s never been a very athletic fighter, and he’s noticeably slower at 41 years old. The French native seems to realize how vulnerable he’s become, as the Kongo we’ve seen in recent fights is much more cautious.

In fact, the Bellator version of Kongo is nearly unrecognizable. Once allergic to wrestling, Kongo has spent plenty of time since joining his new promotion trying to grind out wins with rudimentary wrestling. He still prefers to strike, but the second he’s in danger he’ll seek to press opponents into the cage.

Still, Kongo has compiled a 6-2 record inside Bellator, with one of those losses coming against undefeated champion Vitaly Minakov. The Parisian is far less exciting than he once was, but he seems to have found an effective formula for earning wins.

For somebody who has never stepped inside the octagon, Tony Johnson has faced some big names fighting in KOTC, OneFC and Bellator. The AKA product owns wins over Derrick Lewis – who has won four straight in the UFC – and former UFC heavyweight champion Tim Sylvia. He’s even stepped into the ring against Daniel Cormier, which resulted in a first round submission loss.

Johnson is exactly the type of fighter who will force Kongo into a firefight. With 5 KOs in 10 career victories, the Texan’s power has to be respected. At 6’1”, he weighs in right at the heavyweight limit at 265 pounds, and generate an incredible amount of force.

This isn’t an easy call in Bellator betting. While Kongo has a major edge in experience, he can’t keep successfully fending off hungry young fighters forever. I’d take a shot on Johnson here, especially at these fight odds.

When you’re a prizefighter that’s 39 years old, you’re going to be facing a lot of questions about retirement with every bout. That’s the case for Joe Warren, a former champion at both featherweight and bantamweight. A 1-2 record in his past three fights doesn’t help.

Warren is one of Bellator’s true homegrown stars, and has engaged in some of the promotion’s most memorable fights. He’s far from finished, as his experience alone makes him a tough out for anyone, but he’s no longer a championship-level fighter – especially with Bellator’s recent acquisition.

His fight against 26-year old Sirwan Kawai is a dangerous one. If this was five years ago, Warren would surely be a big favorite, but he wasn’t fighting Father Time back in 2011. Kawai is nearly 15 years the junior of Warren and has to see this as a stepping stone fight against one of the promotion’s more recognizable fighters.

Just like Kongo, you need to be weary of Warren’s advancing age. But the difference here is that physically, he hasn’t declined as much as the big man. Kawai should give him a tough run, but Warren’s level of competition has been far higher. Take Warren to win by decision.

This is a resume padding fight for Anastasia Yankova, who is pretty much Bellator’s version of Paige VanZant. The 25-year old has plenty of sex appeal, and her 3-0 record with three submissions makes her a fighter to watch. Veta Arteaga is also undefeated at 2-0, but she’s even rawer than Yankova.

The fight pick is Yankova by third round submission.

With 19 combined KOs between them, there is no question that Derek Campos and Djamil Chan are going to try and light each other up. Both men are aggressive headhunters, and this fight will come down to who lands the money shot first. That makes picking a winner a straight 50-50 proposition.

Your MMA betting move here is to take the under.