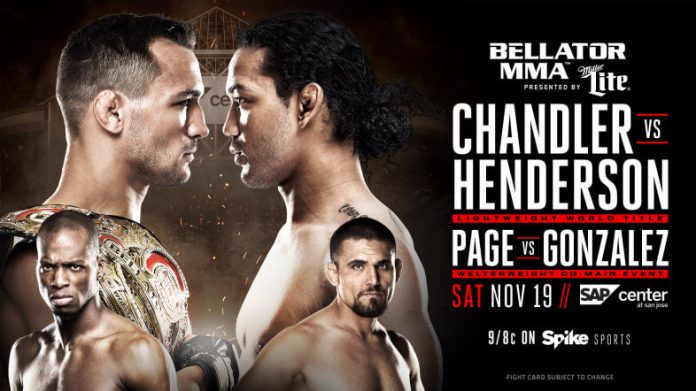 There’s more than just a shiny strap at stake. Bellator, the world’s No. 2 MMA organization, needs its top fighters to beat high-profile UFC alums if it truly wants to change the competitive landscape of the sport.

Chandler will look to do what McGeary didn’t in this Saturday’s main event.

Let’s take a look at your MMA betting options and preview the night’s biggest fights.

All Bellator odds courtesy of BookMaker.eu

Henderson left the UFC as a top-6 lightweight, with big dreams of being a dual weight champion as a bigger fish in Bellator’s smaller pond. President Scott Coker obliged, pitting him in a welterweight title match against 170-pound kingpin Andrey Koreshkov.

“Smooth’s” vision was quickly shattered, as Koreshkov treated Henderson like a personal punching bag for five rounds. In Henderson’s next fight, lightweight Patricio Freire proceeded to do the same before a fluke leg injury gave Benson a lucky TKO win.

We can chalk up Henderson’s loss to Koreshkov as a case of a much smaller man trying to fly too close to the sun. But that doesn’t explain how bad he looked against Freire. At 32, Henderson is far from done – but it sure looks like he’s declining physically.

Now, Henderson’s got to face the streaking Michael Chandler, who has reeled off three impressive striking victories. Bellator’s lightweight champ has only lost to two men so far in his career – Will Brooks and Eddie Alvarez.

Brooks is the former champion, and Alvarez went on to capture the UFC belt. Chandler is a beast that belongs in the world top-10.

Michael “Venom” Page is Bellator’s best bet at grooming its own superstar. He’s got the mouth of Conor McGregor and flashy striking ability of a prime Anderson Silva. Seriously, check out what he did in his last bout to poor (graphic images!) Cyborg Santos’ forehead, courtesy of a flying knee.

No, that’s not a prop from a horror movie – the Brazilian’s dome is caved in like the groove from the Death Star. It was so bad that his ex-wife started a GoFundMe account to help pay for damages.

While Cyborg was writhing in pain from the blow, did “MVP” do the honorable thing and check in on his opponent? Hell no. He threw a plastic Poke ball in Santos’ direction, put on an Ash hat and gave the Pokemon victory pose.

I don’t know how I feel about it, except for the fact that it was a genius marketing move capitalizing on the peak Pokemon Go popularity.

We Still Have No Idea Just How Good Page Can Be

He has yet to face a top-ranked fighter. Gonzalez isn’t anywhere close to a legitimate contender in these fight odds, but it’s a step in the right direction.

He trains at Team Quest – a solid fight team – and comes into the bout with five straight wins. Can he derail Page’s hype train?

You get the sense that the 6’4” Linton Vassell could be a solid UFC fighter. He’s been a steady force in Bellator’s 205-pound class with his only losses coming against former champions in Emanuel Newton and King Mo Lawal.

He just avenged the loss to Newton, putting him back in the mix. His big frame packs plenty of power, but he’s actually well-rounded with 6 KOs and 7 SUBs in 16 career victories.

Francis Carmont is a former UFC fighter with wins over some decent fighters like Tom Lawlor and Lorenz Larkin. Since getting cut from the big show, he’s 3-1 inside Bellator.

But that lone loss was big – a first-round KO courtesy of the aforementioned Phil Davis. A loss to Vassell would pretty much cap his ceiling in the division.

One of Bellator’s best prospects, Adam Piccolotti is 8-0 with four wins inside Bellator – with his last three coming by way of submission. He trains at AKA, alongside Luke Rockhold, Daniel Cormier and Cain Velasquez, so you know that he’s getting better every day.

His competition hasn’t been very impressive, but you have to like what he’s done so far.

Piccolotti is taking a step up in opposition against Brandon Girtz. With three straight wins – TKOs sandwiched around a split decision over Melvin Guillard – Girtz is enjoying the best streak of his MMA career thus far.