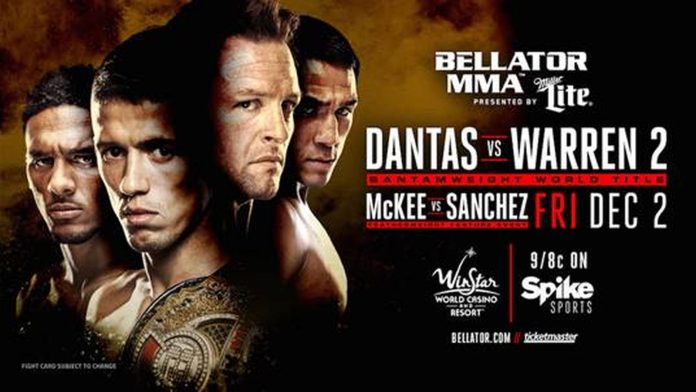 This Friday’s Bellator 166 is a big night for the promotion’s 135-pound class. Champion Eduardo Dantas will defend his title against Joe Warren, who he lost the title to back in 2015. In the co-main event, former champion Marcus Galvao – who beat Warren but lost to Galvao – will meet L.C. Davis, who lost to Warren.

It’s been a revolving door for the division, but perhaps Dantas can stabilize it by avenging his loss to “The Baddest Man on the Planet.” Rounding out the main card are two bright prospects: Middleweight Chris Honeycutt and the undefeated A.J. McKee.

Let’s take a look at your betting options, with MMA odds from BookMaker.eu. Please note, odds are updated daily and subject to change.

These two first met in 2014, with Dantas losing a decision to Warren. He rebounded with a win over Mike Richman in May 2015, earning a crack at then-champion Marcos Galvao. The Nova Uniao product laid a five-round beatdown to earn the strap in commanding fashion. At 27, “DuDu” seems to be hitting peak form.

After beating Dantas, Warren immediately lost the belt to Galvao, who submitted him with a painful kneebar. Since then, he’s sandwiched wins over LC Davis and Sirwan Kawai around a loss to Darrion Caldwell. Warren is one of promotion’s longest tenured fighters, with 16 fights under the Bellator banner. His tough as nails approach has kept him in contention for years.

At 39, Warren’s time at the top is slowly coming to an end while Dantas is 27 and just hitting his peak. While Warren is as tough as they come, he can’t fight Father Time and the champ at the same time.

Our Pick: Dantas to win

Where Does Galvao Go From Here?

The former champion is in a tough spot. He just lost his title to Dantas this past June, and it was his second loss to DuDu in a title fight. Clearly Dantas has his number, making a third matchup a difficult proposition to consider. What makes it worse that he’s beaten current challenger Joe Warren. He’s probably praying for a Warren win to justify another shot at the belt.

Davis is coming off a UD loss to Warren, which snapped a three-fight winning streak with a notable victory over Hideo Tokoro. If he wants to ever be considered a legitimate title threat, he’s got to beat guys like Galvao. At 36 with 30 pro fights, his window is definitely starting to close. Still, his well-rounded skillset makes him one of the better 135ers in Bellator.

This should be a pretty close matchup for MMA betting, but Davis has never been able to beat a top-notch contender yet. Galvao definitely qualifies as one.

Our pick: Galvao to win

Honeycutt makes his fourth appearance in 2016, hoping to close out the year on a three fight win streak. The middleweight prospect comes into the bout with back-to-back wins over Matt Secor and Mikkel Parlo following a first-round TKO loss to Paul Bradley. At 8-1 with 4 KOs, “The Cutt” is still developing, but his power should be a definite factor in the thin middleweight division sooner than later.

Although less heralded, Ben Reiter is a prospect in his own right. An impressive 17-1-1, Reiter’s only loss came at Bellator 146 when he tapped out to an RNC applied by Francisco France. He bounced back in his most recent fight, earning a UD over A.J. Matthews and bringing his Bellator record to 3-1.

Tough call here, but I’d lean towards Reiter in these fight odds, mostly because he’s freaking ginormous for the weight class but moves relatively well. At 6’3”, he’ll have a five-inch height advantage and has power of his own.

Our pick: Reiter to win

Just 21 years old and already 5-0, McKee has looked like a beast since making his Bellator debut in 2015. He’s trucked every one of his opponents thus far, finishing each in the first round. We can’t discount that his opposition hasn’t been that great, but the booking against Sanchez suggests that the training wheels are starting to come off.

Sanchez is a 16-fight veteran that grinded his way to three straight split decision victories before losing in the same fashion in his most recent bout against Daniel Weichel. I honestly can’t think of another fighter who has fought to four straight SDs. If he makes it to five, that’ll mean he tested the young gun, which makes it worth a watch.

It’s doubtful that McKee blasts through Sanchez like he’s done everyone else. Still, Sanchez doesn’t have anywhere close to the ceiling that McKee does.

Our pick: McKee to win

For more UFC and MMA betting news, check out What Are Conor McGregor’s Odds Against Woodley, Nurmagomedov or Aldo?