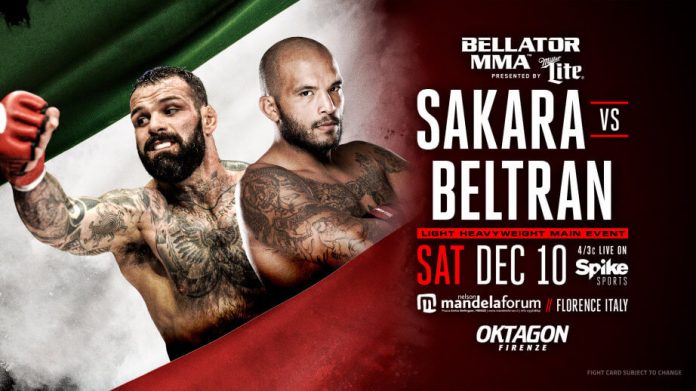 This Saturday, Bellator heads to Italy for a hybrid MMA/kickboxing card with a main event between UFC alums Alessio Sakara and Joey Beltran. Also on the card is another light heavyweight clash between Philipe Lins and Pietro Capelli, and a middleweight tilt between John Salter and Claudio Annicchiarico.

If you haven’t heard, the original main event between Melvin Manhoef and Rafael Carvalho was cancelled due to an injury to Carvalho. It sucks, but the show must go on.

Let’s preview the MMA portion of the card and take a look at your Bellator betting options at BookMaker.eu.

Sakara gets the privilege of representing his home country on native soil, and Bellator has chosen an opponent that perfectly matches his aggressive boxing style. Though Sakara was never able to break into the UFC’s top 10, he did face notable names like Chris Weidman, Brian Stann, Thales Leites and Chris Leben.

Leites was the only guy that he actually beat, but his willingness to stand and trade earned him a fair amount of respect from his peers.

He was unable to win against any of those fighters, but he did earn a reputation as a gritty slugger.

While neither can be considered a legitimate title threat, this fight should be a lot of fun. Both are aggressive boxer-punchers who are willing to bleed for the win. Sakara’s momentum and crisper technique should carry him to victory.

Silva was plucked from a random Brazilian promotion as a last second replacement for Cappelli. All we’ve got to go on is that he’s obviously got some pop, with 9 KOs in 12 victories. Still, asking him to make a major promotional debut overseas against a vet is kind of a lot.

3-1 in Bellator, Lins most recently scored a second round TKO of Guilherme Viana at Bellator 159. His only loss could be considered a fluke as well, as it was the result of an injury inside the cage. “Monstro” has 11 career fights, with eight stoppages in 10 wins. He’s a solid middleweight with top-10 potential in a thin division.

It’s easy to see in the Bellator odds that Silva is outmatched. Lins might have to make some adjustments against the rookie, but he should have no problems for most of the fight.

Like Cappelli, Annicchiarico is an Italian making his Bellator debut. But man, the promotion must have been desperate to get local talent on the card. There’s just no other explanation as to why he’s fighting in the first place.

Annicchiarico has just one pro fight to his name, a loss to a complete unknown fighter. I just don’t see how he has any chance against a former UFC fighter – one who’s notched finishes in all 12 of his career wins.