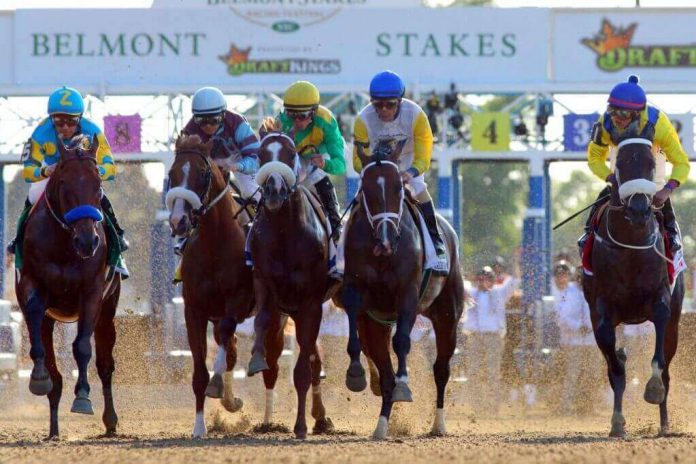 After two straight years where horses were running for the Triple Crown, the Sport of Kings will have the air taken out of the balloon just a bit with the 2016 Belmont Stakes.

Though Nyquist isn’t going to have a shot at becoming the second horse in a row to win the Triple Crown, the prospective matchup between him and the Preakness Stakes winner, Exaggerator, should be enough to have horse racing fans salivating, even if the average fan is less interested in the end result.

We’re only a few hours removed from the Preakness Stakes at the publication of this article, and already, the Belmont Stakes is being billed as the rubber match between Exaggerator and Nyquist.

Of course, that’s not totally true knowing that Nyquist is actually 4-1 all-time against Exaggerator, but the early indications are there that the late-closing Exaggerator will be the Belmont horse racing favorite to win against his archrival.

Exaggerator will be the favorite to win the Belmont Stakes against [nyquist].

The reason for Exaggerator’s odds to be the favorite at the Belmont is simple. He’s a closer by nature, and the bigger and longer the race, the more room he’ll have to navigate and more time he’ll have to make his move.

He made said move significantly earlier in the Preakness than he did at the Kentucky Derby, and that’s why he was able to get up with plenty of time to go in the second leg of the Triple Crown.

Nyquist is the bigger question mark of the two. It isn’t often that a Kentucky Derby winner who doesn’t win the Preakness Stakes goes to the Belmont Stakes, but this might be too big of a spot for trainer Doug O’Neill to pass up.

Nyquist won’t have a chance until the Breeders’ Cup to collect a purse this large again, and winning the Belmont Stakes could set him up to head to the Dubai World Cup the beginning of next year whether he does or does not win the Breeders’ Cup Classic.

The rest of the field at the Belmont Stakes is still in the early stages of taking shape.

The Japanese connections for Lani actually trained between the Kentucky Derby and the Preakness Stakes at Belmont Park, knowing that he was going to be entered in the third leg of the Triple Crown, so long as he came out of the Preakness without any major concerns. He’ll be the only other colt in the field to run against both of the big boys in each of the first two races.

Todd Pletcher stated weeks ago that he was going to bring Destin with him to the Belmont. The question remains whether he’ll bring Stradivari, the fourth place finisher at the Preakness with him as well.

Suddenbreakingnews, Brody’s Cause and Cherry Wine

Suddenbreakingnews and Brody’s Cause have both been prepping for the Belmont Stakes as well since finishing fifth and seventh in the Kentucky Derby, respectively. Creator, Mo Tom and Mor Spirit ran in the Derby as well and are all up in the air.

The biggest footnote of the Preakness Stakes is that Cherry Wine finished second to Exaggerator, not Nyquist. It’s a good sign of late blooming, and it’ll be tempting for Dale Romans to bring Cherry Wine to the Belmont Stakes, even though he wasn’t originally pointed in that direction.

You should also keep a close eye on the horses who ran in the Peter Pan Stakes. Unified, the horse who won the race as an odds-on favorite, would probably end up being the third choice behind Nyquist and Exaggerator to win the Belmont Stakes, but his connections aren’t sold that he’s really ready to run the mile-and-a-half marathon.

More likely Belmont picks are Adventist and Governor Malibu, both of which have had connections trying to get them into a Triple Crown race since the very beginning. Governor Malibu finished first at the Federico Tesio Stakes and was left out of the Preakness Stakes because he was ultimately DQ’d at the wire. Adventist was long considered on the Kentucky Derby trail, but he couldn’t find enough points to get into the field.

Governor Malibu was second best at the Peter Pan Stakes. Adventist finished fourth, though he was considered the most likely option to beat out Unified at the time.

The 2016 Belmont Stakes goes to post on Saturday, June 11, at approximately 6:35 p.m. ET. NBC will have live coverage of the third and final leg of the Triple Crown from Belmont Park.

(Editor’s Note: Click here to learn how you can get $10 free to bet the Belmont Stakes at Bookmaker.eu)

After the Preakness Stakes, Nyquist is no longer a Triple Crown contender, but what are his propects for the rest of the season? Triple Crown Odds: Nyquist Aims to Follow American Pharaoh