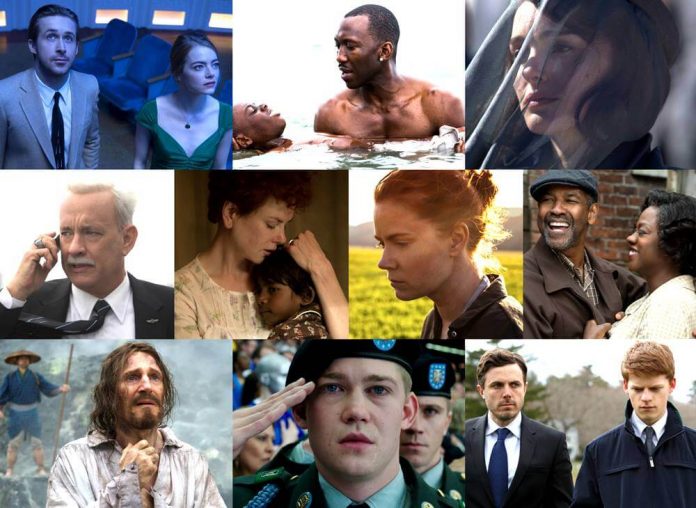 The 89th Academy Awards will be handed out to filmmakers and actors on February 26. Without further ado, here are the top contenders in our 2017 Oscars predictions for this year, along with our picks on who will take home the golden statue.

The Academy loves films about its own industry. That’s why we’re betting on La La Land. Emma Stone plays a struggling actress, whose relationship with her jazz pianist boyfriend (played by Ryan Gosling) becomes strained when his career begins to overtake hers.

It’s one of the few feel-good movies on this list, which Oscar voters tend to like as well.

But don’t count out Lion. It’s being released by The Weinstein Company and the Weinstein brothers have upset the Oscars in the past.

We’re going with Damien Chazelle for La La Land because the movie that wins best picture also often takes home the director honor. But as we get closer to Oscar time, if the buzz for another movie increases in the best picture category, this will change.

Casey Affleck gives the best performance of the year, hands down. It’s still early, but it’s hard to see anyone taking the prize from him.

Natalie Portman. This is going to be the category you’ll have to watch this year, as the worthy contenders could change in the Oscars betting odds.

Ever since La La Land premiered in Venice, leading lady Emma Stone has been the hot favorite to take home the Oscar. She even won the Film Festival’s Volpi Cup for Best Actress. But right now it’s all about Portman – some critics say it is her best performance ever. Honestly, it could be any of these ladies.

This is another tough category to handicap. We’re betting on Jeff Bridges. He has the edge at the moment. It’s really one of his best performances in a while.

Some good underdog bets include Liam Neeson for Silence at +800 and Hugh Grant is a possibility for his role in Florence Foster Jenkins at a juicy +1600, and Michael Shannon in Nocturnal Animals at +450.

Naomie Harris should get her the win for her heart-wrenching performance. But watch out for Viola Davis, currently favored by bookmakers at -200.

Another contender is Michelle Williams (Manchester by the Sea). She has been tipped for her fourth Oscar nomination (having previously been nominated for Brokeback Mountain, Blue Valentine and My Week with Marilyn). She plays Randi in Manchester by the Sea. Her estranged husband returns to their home town with his nephew after the sudden death of his brother.