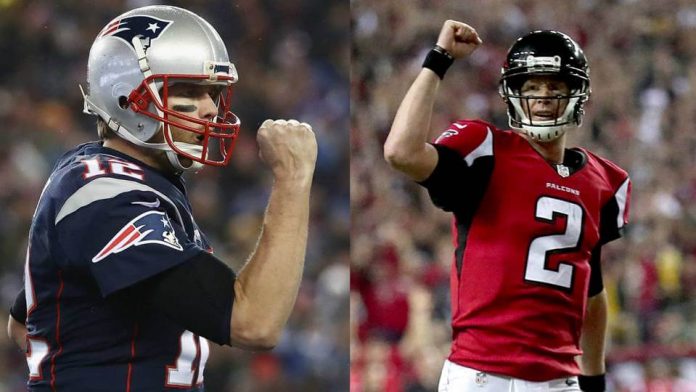 Considering the fact that the Super Bowl is only five decades old, it’s perhaps not nearly as impressive to set Super Bowl records as you might think. That said, we still celebrate the accomplishments as if they were truly something special – and they certainly are!

But for bettors, we don’t have a “Hall of Fame,” though we probably should. Those teams out there that excel for us at the football betting windows and cover a slew of spreads or push games over the total with ease game in and game out.

This year, the New England Patriots and the Atlanta Falcons are playing in the Super Bowl, and in both cases, these teams each deserve their own bust in the “Betting Hall of Fame.”

The Falcons are one of the best ‘over’ teams in the history of the NFL. They went 13-2-1 in the regular season for over backers, and are 2-0 here in the playoffs, making them the first team since the 1997 Denver Broncos to play 15 over games in the same season. That team, as you might recall, won the Super Bowl, its first of two consecutive championships.

But that Denver team played 20 games that season to get to 15 over games. The Falcons are at just 18 games right now and are a far superior 15-2-1. Furthermore, Atlanta and Green Bay just played the NFC Championship Game with a total of 60, the highest for a playoff game in NFL history – and the game went over the total by a narrow margin in the fourth quarter.

Perhaps the most stunning stat about the Falcons and their magical ‘over’ run this year? They went a polar opposite 2-13-1 towards the ‘over’ last season. Talk about two straight seasons in the Hall of Fame for NFL betting?

But when you really think about greatness from a betting standpoint, it’s not about totals. It’s all about beating the spread in the Super Bowl odds, and no team has done that better than the Patriots this season.

This New England team in 2016-17 has already covered both of its playoff spreads and is on its way to potentially having a 16-cover season.

The Last Time a Team Covered 16 Games in a Season…

…including the playoffs was the 1989 San Francisco 49ers, a team already largely considered to be the best ever in NFL history.

That Niners team went 13-3 ATS in the regular season and 3-0 ATS in the playoffs, capping off the Super Bowl with one of the most emphatic victories ever in the game, a 55-10 triumph over the Broncos as 11.5-point Super Bowl favorites.