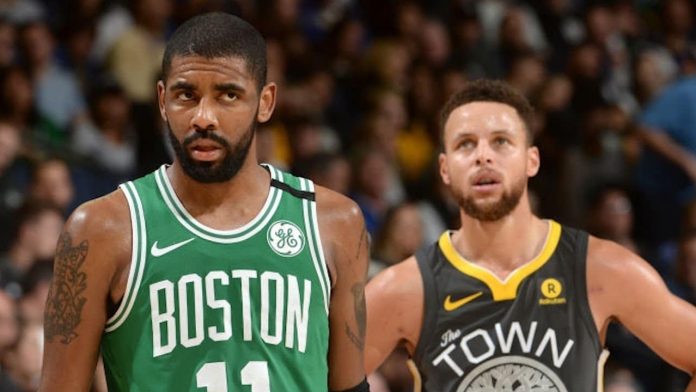 Kevin Durant spoke about the Boston Celtics on Monday and said the team would be just fine for the playoffs despite some issues throughout this regular season. Durant and the Golden State Warriors are hoping Boston’s fortunes don’t turn around quite yet. The Warriors will host the Celtics in a game that features the NBA title favorite and a Boston team hoping to be a true contender in the playoffs.

Golden State is the best team in the NBA and will get this matchup at home, which will make it a substantial favorite. Despite all of the inconsistency this year, Boston has a talented team which is one of the few that can hang with the Warriors when things are going well.

The Celtics have a record of 38-26 on the season. They were expected to win the East this year with the return to health of Kyrie Irving and Gordon Hayward, but there have been a lot of bumps in the road. Boston has not played well on the road with a mark of only 14-16.

The Warriors are 44-19 on the year. Golden State has not been super sharp lately with four losses in its past 10 games, but is 23-8 at home and has the tools to cruise to the win. The Warriors will be favored by a handful of points.

The Warriors are expected to add forward Andrew Bogut to the roster soon. He isn’t going to play in this one but Bogut is a veteran who could give the team some worthwhile action down the stretch. He is 34 years old and shouldn’t play huge minutes but has championship experience and will be an asset.

Bogut won’t be available, while Golden State could also be without shooting guard Klay Thompson and small forward Andre Iguodala due to injury. Thompson had an MRI on his knee after missing the team’s last game but it came back clean and he is listed as questionable. Iguodala is suffering from general soreness which coach Steve Kerr said is a product of him being “old.”

Boston has One of the Better Defenses

The Celtics are allowing 106.8 points per game on the season. Boston has one of the better defenses in the NBA and it will need to be on point against the powerful Warriors. Even if Thompson doesn’t play, Golden State will still have Durant and Stephen Curry leading the way.

The Warriors are not going to be completely stopped but Boston needs to force tough shots and hope Curry and Durant are cold from the outside. If Golden State gets to 115 points or more it is unlikely the Celtics will be able to keep pace.

The Celtics have enough talent to stick around for a while but it’s hard to pick against the Warriors at home. Curry and Durant should be able to have big outings even if Thompson can’t go to lead their team to the win.

Boston is in fifth place in the East and a loss in this game would keep them from closing the gap on the teams above them. However, the Celtics should be able to keep this close enough to cover the spread.