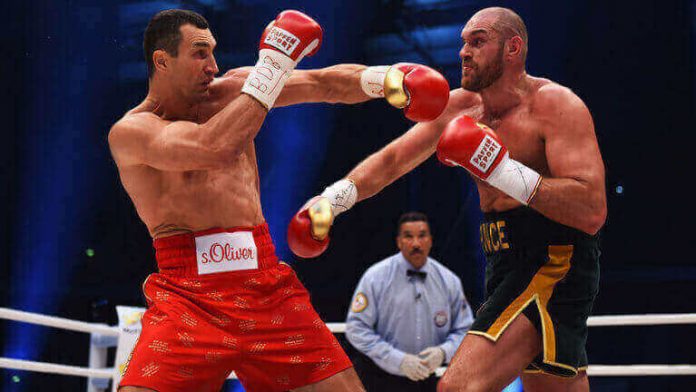 At 40 years old, it’s a wonder how many more fights Wladimir Klitschko has left in the tank. A career that has now spanned 20 years could be coming down to the fight tentatively scheduled for October 29 against Tyson Fury, the man who finally wrestled the heavyweight championship away from him in November after a championship reign of more than 10 years.

So does Klitschko still stand a chance against Fury? Let’s take a closer look at the boxing odds.

Klitschko is known as one of the most powerful fighters in the world, and if he was an American, he’d be one of the biggest and most recognizable personalities, not just in boxing, but in sports in general. He’s been brilliant throughout his career, and even with the loss to Fury from late last year, he’s a whopping 64-4 with 27 successful defenses of his championship belts.

Standing at 6-foot-6 with a reach of 81 inches, Klitschko is an imposing figure for sure. He’s known as Dr. Steelhammer for a reason, as he’s got massive power in both of his hands. That’s why he has a stunning 53 knockouts over the course of his 68 fights.

Of course, many knew that the fight against the undefeated Fury was going to be tough for Klitschko. Fury was really the first fighter to go up against Klitschko who was both as skilled as he was and was even bigger than him. Fury goes 6-foot-9 and has a reach of 85 inches, and it was that reach that really kept him in the driver’s seat for much of that title fight in November.

Fury is now 25-0 in his career with 18 knockouts, though it should be noted that his knockout percentage has come down as his caliber of competition has increased. No one imagined that two powerful fighters like Klitschko and Fury would actually go the distance over the course of the 12 rounds in November, but they basically cancelled each other out for the duration of the fight and had to go to the cards.

Klitschko has become used to being favored by laughable margins. There have been fighters with 100 to 1 odds on their heads against Klitschko. Fury was a lot more modest at 4 to 1, but in the grand scheme of things, most assumed that Klitschko was going to hand his adversary his first loss in his career, most likely by knockout.

Now though, Klitschko is in some serious trouble. He’s an underdog for the first time in well over a decade, though the margin is only +100. This is a legitimate “road game” as well for the Ukrainian giant, as the fight is taking place in Fury’s hometown of Manchester. Most of Klitschko’s fights have been in Germany since he began his title reign, though he has fought Americans DaVarryl Williamson and Bryant Jennings in the United States in the past.

Fury is the -120 favorite, and we recognize the fact that this fight really could go either way after the challenger took a unanimous decision with a maximum of five points separating the fighters on all three of the cards.

Klitschko doesn’t have nearly as much power behind him now as he did then, but he’s still a fantastic fighter, albeit one which has relied a little bit more on tactics in recent fights than just pure power. The first fight between these two was a little sloppy, as neither man landed a huge percentage of their punches, and there wasn’t that one flurry between the two which could’ve proved to be the difference.

Klitschko wouldn’t have accepted this rematch if he didn’t think he could win this fight. Is he a little bit overrated here? Probably. But the overlay from when he was a -500 favorite in his first fight against Fury is just too much to pass on. Give us Dr. Steelhammer to retain in what might be his final fight.

The backdrop for this epic heavyweight bout betwteen Wladimir Klitschko and Tyson Fury is set for Manchester Arena in England. It’ll all go down on Saturday, October 29, 2016 with the entire night of fighting available to be seen on HBO.

What about a boxing/MMA matchup? Check out MMA Fantasy Odds: Floyd Mayweather vs. Conor MacGregor