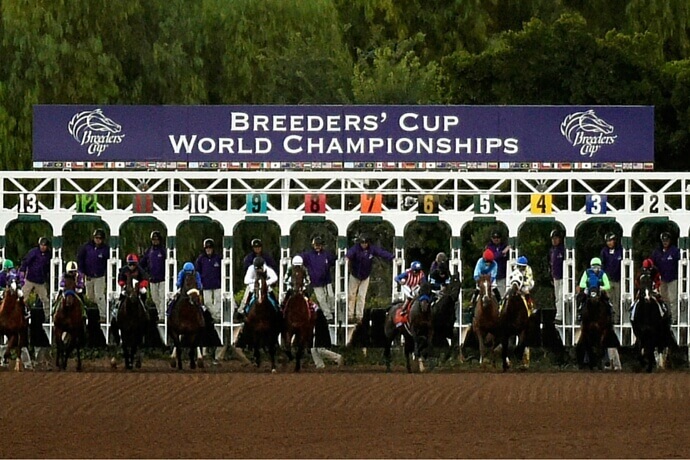 Friday night is traditionally ladies’ night at bars across the country. The same is true in the world of horse racing as well.

The Breeders’ Cup kicks off on Friday with four world championship races, the showcase of which is the Breeders’ Cup Distaff. There are only eight who are set to go to post for the Distaff, but this might be the tightest field of the bunch in the 13 races that make up the Breeders’ Cup.

Stellar Wind might be the betting favorite at 5 to 2, but she’s going to be up against a heck of a field in the Distaff. This is an unusual race with so many high-caliber ponies in it. She’s going to have been off for 97 days before this race, but that isn’t out of the ordinary for five-year olds in this world. Stellar Wind is already 3-for-3 this year in Grade 1 races, and the layoff shouldn’t bother her.

Our far greater concern is that she hasn’t won the Distaff in two previous tries, finishing fourth last year and second the year prior. That’s two of her five career setbacks.

Not only are these other four contenders all lumped together one right next to each other in this field, but their racing styles should make these starting posts intriguing as all get out.

Paradise Woods is the one of the four that really needs to get to the rail early, yet she’s the one who is the most outside of the bunch. She’s going to have to expend a lot of energy to play to her strength of running up front, a task that jockey Flavian Prat had better calculate properly to leave a chance for victory in the dying furlongs.

Abel Tasman won the Kentucky Oaks this year, giving her a rare chance to pull off the Oaks/Distaff double.

Forever Unbridled is at the tail end of her career, but she has seven victories on seven tracks all-time. Del Mar is one of her favorite spots, and if this is the end for her at the age of five, she could have one more bit of magic left in the tank.

The most interesting of these four is clearly Elate. Trainer Bill Mott has won the Distaff five times in the past, and he’s at the point in his career that he’s being really selective with the thoroughbreds that he’s training. That says a lot about Elate, and it’s showing on the track. She’s got two straight 108 Beyer Speed Ratings to her credit and has been the most impressive filly or mare in this field this year overall.

You couldn’t have asked for a worse draw for Champagne Room or Romantic Vision. These two were already up against it, and the fact that literally all of the top contenders in this eight-horse field are between them is bad news.

This is the last race in the career for Romantic Vision before she’s put out for breeding. She has won her last two, including the Grade 1 Spinster Stakes, but her career earnings are still set at just $610,086 in 19 races.

Champagne Room is actually a world champion in her own right, but her own claim to fame in her seven-race career came at the Breeders’ Cup Juvenile Fillies last year. She beat a solid field of 12 to become the two-year old filly champ, but since that point, she’s been a mess. Maybe a win in an allowance race in September will get her going, but 15 to 1 seems like a short price on a potential one-race wonder.

Mopotism has never been afraid to run against the big girls, but she’s in over her head here. This will be her third consecutive race running as a 20 to 1 or greater longshot, and she hasn’t hit the board in either of her last two. Mopotism only has two career wins, the last of which at Sunland Park in February. She’s 0-for-6 since then.