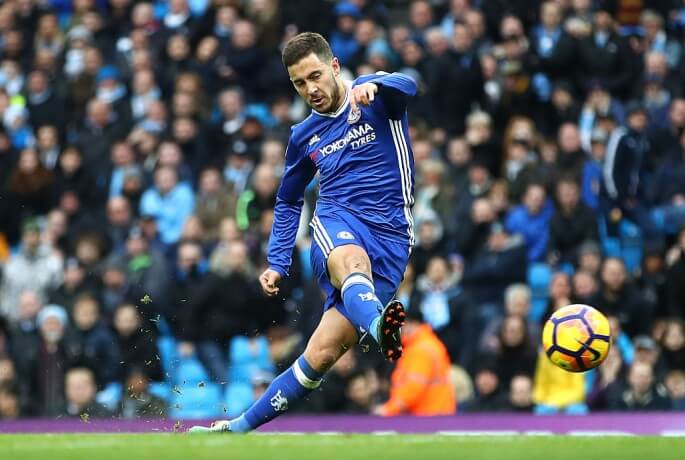 Even though Chelsea is fresh off of one of its worst seasons in recent memory, it’s worth remembering that the team was the Premier League favorite to win at the start of the season. So though it’s clear that the results in 2015-16 were disappointing, we probably should have seen success this year coming.

We’re through just beyond half of the EPL season, and the Blues are sitting on 52 points, two more than they amassed for the entire season last term. They’re seven clear of Tottenham and Liverpool, eight ahead of Arsenal, 10 ahead of Manchester City and a dozen in front of Manchester United. Check out the latest soccer betting odds.

Theoretically, this is the size lead that really shouldn’t be blown in the new year. There are, of course, a number of potential pitfalls along the way still to be seen, including an away match against Liverpool on January 31, a home date with Arsenal four days later and an April that includes matches at home against Manchester City, at Manchester United, and at Everton.

But if we’re being honest, even if all of those matches go wrong and no points are acquired from the four, the way the rest of the docket plays out, that should be good enough to win the Premier League title.

However, there are definitely some problems at Stamford Bridge that have to be addressed, not the least of which is the fact that Diego Costa is at odds with manager Antonio Conte.

Costa was dropped from the first team for a couple matches and was told by his boss to “enjoy China,” referencing a potential link between Costa and some Chinese clubs preparing huge bids to bring one of the best strikers in the world to their league.

Which Team Has the Potential to Stop Chelsea?

The telling times will come within in the next two weeks while we’re in the transfer window. Will Costa get back in the first team this week against Hull City? He almost certainly won’t be needed to get three points from the Tigers, but if Conte wants to avoid the drama, he’ll put his star back in the fold. Otherwise, we’d say there’s a good chance that Chelsea’s best player could be on the move before the end of the transfer season.

If you want to fade Chelsea, though, the big question is whether there’s a team out there that can run it down.

Tottenham is a flawed team that probably isn’t going to do a heck of a lot in the transfer window. Manchester City feels like it’s a year away to get into Pep Guardiola’s image. Liverpool is playing beyond its ability.

Manchester United is a long way back, though it could be set for a good run in the second half of the year thanks to good form and a lot of money that is being bandied around in transfer rumors.

And Arsenal? The Gunners always seem to fold as soon as they get their chance to get back into the race every single season. There’s a reason why Liverpool is the second choice to Chelsea but is still a tremendous dog in the soccer odds at +500.

Check out the latest soccer odds on our Soccer Odds Comparison page.