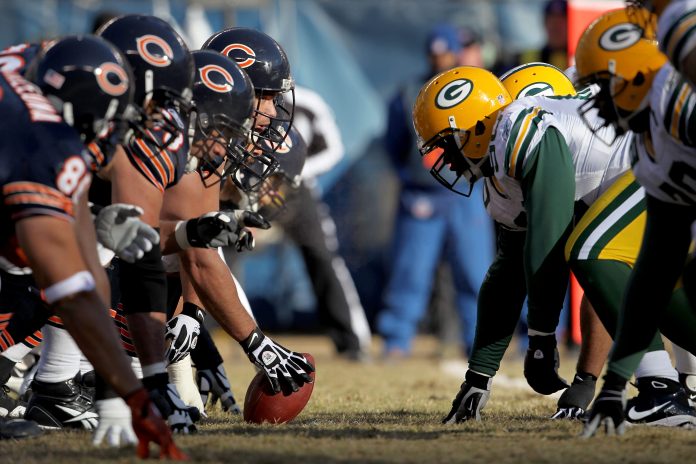 The greatest rivalry in the NFL and one of the best in all of sports is renewed in Week 1 when the Chicago Bears take the short trip north to visit the Green Bay Packers in the first installment of Football Night in America. There is significant buzz surrounding the Bears heading into the season now that they’ve parted ways with John Fox, who directed the worst three-year stretch of football the franchise has seen since Abe Gibron was coaching.

Looking to turn the offense around, the Bears hired former Arena Football League star Matt Nagy, who directed an exciting group in Kansas City last year. Nagy has pieces to work with in Mitchell Trubisky and Jordan Howard, and the Bears pulled off a blockbuster trade last week by acquiring former Defensive Player of the Year Khalil Mack. The Bears should be better and they’ll be fun to watch. The Packers’ eight year playoff run ended in 2017, but they get Aaron Rodgers back to start a new streak.

Four years of double digit losses and last place finishes in the NFC North is just unacceptable at Halas Hall and the team is trying desperately to reverse recent form. Finishing no better than 23rd in scoring during Fox’s tenure, it was obvious what the Bears needed. And they may have gotten it in Nagy. The Rams had so much success last year with a rookie coach and second-year QB that the Bears decided to give it a shot.

Trubisky didn’t have a lot of success last year, but he was rarely given the chance to show what he could do. The shackles have been taken off and the team got some playmakers around him. We will even see the 2017 No. 2 overall pick take some shots downfield. Score more points and add a defensive playmaker in his prime to a top-10 group to limit what opponents can do, and the result should be more victories.

The Bears are working their way back to respectability and it will take some time with a young roster and new coach. The Packers just need Rodgers behind center to become an immediate Super Bowl threat. Last year went downhill when the two-time MVP had his collarbone shattered. Brett Hundley wasn’t the answer and now he’s Seattle’s problem. Green Bay is a favorite to win the division and the conference, and the Pack is looking to continue its dominance in the series.

Green Bay has won four in a row, eight of the last nine, and 13 of the past 15 games. Over that entire stretch the Packers are 11-4 ATS. The only two losses have taken place at Lambeau when the Packers were favored by at least 7.5-points both times. The current line stands at Green Bay -7.5. The turnaround for Chicago has to start somewhere and within the NFC North would be a great place. It’s hard to win a division title if you can’t beat your rivals and the Bears have dropped nine straight to their division foes.

If you were wondering how valuable Rodgers is to the success of the Packers, look no further than the final 10 games of last season. Coming off a three touchdown game against the Cowboys that lifted them to 4-1, Green Bay headed to Minnesota for a critical division matchup. With help of Anthony Barr, Rodgers broke his collarbone and the Pack lost that game and seven of their last 10 to finish below .500 and out of the playoffs for the first time since 2008. Rodgers returned in Week 15 in an attempt to save the season, but he couldn’t get a win and was done for the year.

Fully healed and ready to go, Rodgers will play his first regular season game on the frozen tundra in nearly a year. Last September, Rodgers once again frustrated the Bears throwing four TD passes in a 35-14 rout. Rodgers has won 15 of his 19 career starts against Chicago throwing for nearly 4,600 yards with 42 touchdowns and just nine interceptions. In his last seven encounters with the Bears, Rodgers has 22 TD passes and only one interception.

It’s hard not to like the direction the Bears are headed, but the reversal won’t take place overnight. A new coach, new schemes and several new players will need time to come together. And we don’t know much about the offense since we didn’t see Trubisky play a lot during the preseason. Reps in practice are much different than a real game, and the Bears will find that out in a hurry.

The return of Rodgers will be a huge boost for the Packers, obviously. There is no Jordy Nelson, but an abundance of playmakers remain at the QB’s disposal. Mack and Roquan Smith could play on Sunday, though their snaps might be limited. The damage they can inflict will be limited and Rodgers will work a game plan to combat Chicago’s pass rush. There have been some high-scoring games recently between the two, but this one has a different feel. And I like the Bears to hang around enough to cover the spread with the score falling below the total.

NFL ATS Pick: Bears +7.5 and Under at BookMaker.eu