Home Sports Betting Football Betting Will the Cleveland Browns Go 0-16? You Can Bet on It 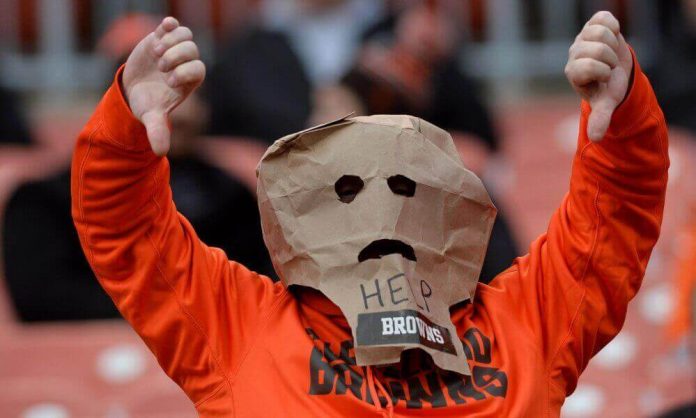 The poor Cleveland Browns. They’ve really played hard over the course of the first eight games of the season, but they have yet to score a victory. Perhaps they’ll be helped by the addition of Jamie Collins, whom they added on Monday in a trade with the Patriots.

BookMaker.eu has released Cleveland Browns odds for a prop on when the Browns will snag their first ‘W’ of the campaign, leaving an option for the dreaded winless 0-16 season.

What’s the Possibility of a Winless Season?

The immediate reaction for bettors must be to look into the possibility of a winless season at 4 to 1, and that’s where the early wagers have rolled in as the the current football betting odds reflect that option at 2 to 1 currently.

Cleveland is halfway home to said prop, and it isn’t out of the realm of possibility that it gets through the campaign without a win. However, it’s worth remembering that only one team in the history of the NFL has ever finished 0-16, that being the 2008 Detroit Lions.

Only one other team, the 1976 expansion Tampa Bay Buccaneers, finished 0-14.

But where could the Browns elusive first victory come from? Certainly, Week 9 against Dallas feels slim with the Cowboys sporting a 6-1 record and playing quite well with Dak Prescott under center.

The fact of the matter, though, is that this might be as good of a shot as Cleveland has, since the NFL lines are at +8.

It Can’t Get Much Worse

Surely, the team isn’t going to be much smaller of a dog than that on the road in Baltimore in Week 10, and the only other game this year that feels like it could be a game with a spread of less than a TD is in Week 12 against the Giants at home.

If we just go under the assumption that Cleveland is going to win just one game and we need to find that victory, we’ll need to search for a team that doesn’t run the ball all that well and can’t take advantage of a rush defense allowing 143.8 yards per game.

We also need to find a team that will allow holes to be opened up for Isaiah Crowell while not being able to terrorize whomever is under center from the right side of the defensive line.

The best NFL bet to us feels like San Diego in Week 16. It’s a long way down the line, and by betting on the game against the Chargers, not only are you betting on the Browns winning that game, but losing the six before it as well.

It’s a longshot for sure at +1000, but that’s a game we have circled as a potential victory for Cleveland. Joey Bosa is a problem for sure, but Melvin Gordon doesn’t have a great yards-per-carry average, and the team relies on Philip Rivers’ arm a lot.

Here Are the Facts

Toss in the fact that the Chargers will have to fly across the country towards the end of the season when there could be very little left to play for (plus, if the game does mean something, it’s sandwiched between divisional home games against Oakland and Kansas City), and the makings are there for Cleveland to win its home finale.

But will the Browns really be 0-14 by the time that game rolls around? It’s a tough proposition to try to figure out, but at a NFL betting price of 10 to 1, we feel that it’s worth a lottery ticket to give this a whirl.