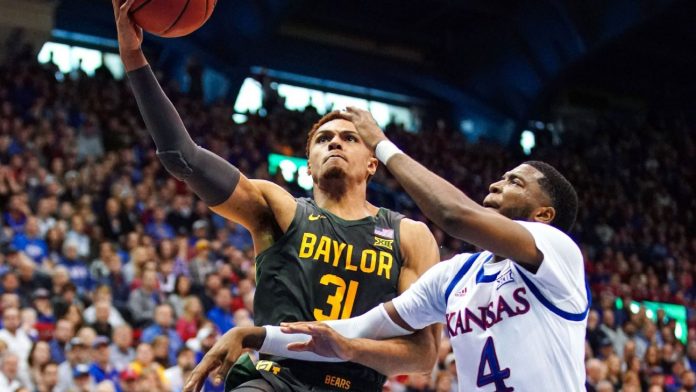 This is the penultimate weekend of the regular season for many college basketball teams. Bubble teams are running out of chances to make a positive impression on the Selection Committee, and we could see the bubble shrink significantly with all the action on Saturday. There are some great games between top teams and some chances for schools to make a statement, making this a great week for betting on college basketball.

These are the two best teams in the country according to Ken Pomeroy. Kansas lost to Baylor 67-55 in Lawrence when these teams met earlier in the season, but the Jayhawks’ only other losses were to Villanova by one point and Duke by two points. Meanwhile the Bears haven’t lost since falling to Washington in a neutral site back on November 8, and they have been the No. 1 team in the nation for five straight weeks.

Kansas and Baylor have two of the three best defenses in the country (the third is fellow Big 12 school West Virginia), so it will be tough for either team to have much success from the floor. Baylor has the big men to limit Kansas’ Udoka Azubuike, and Devon Dotson couldn’t even get to 10 points in the earlier meeting. The Bears’ guards made the difference last time, and that will probably lead to Baylor being a short favorite in Waco on Saturday per the college basketball betting odds.

Tennessee at No. 13 Auburn

While the Tigers have likely done enough to make the NCAA Tournament already with a record of 22-4, they are plummeting in the projected seeding due to their recent performances. Auburn was ahead at the end of regulation in just one of its last seven games, and the program was very fortunate to pick up four overtime wins to maintain its lofty record. However, recent losses to teams ranked outside the top 100 in Missouri and Georgia have many pundits questioning Bruce Pearl’s team once more. Tennessee is just 15-11, but the Vols have five wins over teams rated in the top 70 of Ken Pomeroy’s ratings.

Georgia takes down No. 13 Auburn in Athens! #GoDawgs pic.twitter.com/LabKPXBMLM

No. 22 Houston at Memphis

This is a must-win game for Memphis. The Tigers have lost three of their last four games and are just 7-6 in the AAC. That has led to Memphis falling out of Joe Lunardi’s Bracketology list completely, and this team doesn’t have many chances left to secure an elite victory. Memphis will play Houston twice in its last five games (along with Wichita State), and the Tigers need to win at least two of those games to turn its fortunes before the AAC Tournament.

The Seminoles are having one of their best seasons in school history, and they have a chance to beat out Duke and Louisville to win the ACC title outright. Duke’s huge loss to NC State on Wednesday night really helped the Seminoles in this endeavor, and it also gave the Wolfpack some life in terms of their at-large hopes. NC State now has marquee double-digit home wins over Duke and Wisconsin, and a road win over Florida State would be huge.

NOTHING NEW FOR NC STATE ?

Markell Johnson hits the half-court shot to end the first half for @PackMensBball!pic.twitter.com/Q89dBdgBk5

Florida at No. 10 Kentucky

Coming into the season, Florida was one of the preseason betting favorites to win the national championship. However, Mike White’s team has continually underwhelmed, and the Gators are just hoping to be on the right side of the bubble now. A 17-9 record in a tough SEC should help, but a win over Kentucky in Rupp Arena this weekend would give this program a huge boost and double as its best win of the season. The Gators will host the Wildcats in Gainesville in two weeks too, so Florida will get multiple bites of the apple.

No. 10 Kentucky wins a nail-biter in Baton Rouge! ?

Immanuel Quickley goes for 21pts to stave off a late comeback attempt from LSU! #BBN pic.twitter.com/eAvmgxWGn7

The Pac 12 has been much improved this season. The conference has three ranked teams, and the race for the regular season title is wide open. There are six teams within a game of one another for the top spot out west, so this game will go a long way to determining the conference champion. Oregon is the only team in the Pac 12 that has essentially punched a ticket to the Big Dance with five wins over KenPom top 20 teams (Houston, Seton Hall, Michigan, Arizona, and Colorado), but Zona is close. The Wildcats fell by one point in overtime to the Ducks in Eugene in early January, and this is likely their last game against a Quad 1 opponent.

Although Gonzaga has essentially locked up another WCC title, the Bulldogs have bigger fish to fry this weekend. At 26-1, they are gunning for a No. 1 seed, and they know they have to keep winning with San Diego State undefeated. A loss would likely lead to the Zags falling to the No. 2 line, and that would lead to some long road trips during the NCAA Tournament. Mark Few wants to avoid this at all costs, so BYU will be given no quarter.