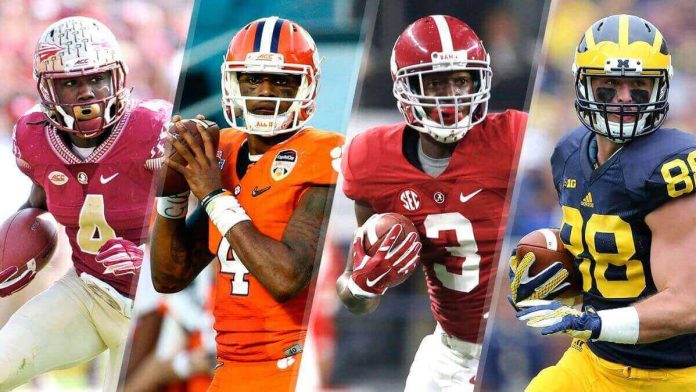 Forty of the biggest games of the college football season already have betting lines posted for them at online sportsbooks.

We’ve picked out the games of the year which will be the biggest and the most bet upon for you to start getting down your action early, before the football betting lines move all over the place as we near their respective kickoffs.

Week 2 isn’t the best week of college football betting, but there are a couple traditional intrastate rivalries that could be quite good here with Pitt being favored comfortably over Penn State and Utah giving 7.5 to BYU in the “Holy War.”

Week 2 might be lackluster, but Week 3 is burning hot for sure! Notre Dame is badly going to need this win over Michigan State to give itself a shot at the CFP this season, while Oklahoma will have its best shot at a non-conference win against Ohio State.

This could be a really bad day for the Big Ten as well. It’s entirely possible that all three of MSU, OSU and Nebraska could lose. The Alabama/Ole Miss game will be huge for the SEC West, and it’s even bigger for the Tide, knowing that they haven’t been able to figure out Hugh Freeze’s side consistently since he’s arrived in Oxford.

Again, not the greatest week ever, but Arkansas and A&M could be in the mix in the crowded SEC West this year, and games like this are what will help shape the college football picks and that title race in 2016.

The SEC East is wide open again this year, and the fact that Georgia, the presumed favorite, is only a pick ’em at home against UT is proof of just how bizarre this division might be.

There aren’t many rivalry games like the Red River Rivalry. Texas might be a double-digit dog in this one, but don’t ever count anything out when it comes to the Horns and the Sooners. Last year, the Longhorns upset OU as double-digit dogs in their biggest win last season.

Another big one in the Big Ten. It’s entirely possible that OSU and Wisky could meet twice this year, but the loser of this one will face an uphill battle just to get to the Big Ten title game. Alabama and Tennessee could also conceivably meet in Atlanta.

It’s been a while since the Vols have bested the Tide, but this could be the year, as demonstrated by this 3.5-point spread.

Boise State has a history of dominating the betting proceedings in these midweek nationally-televised games, but every now and again, it lays an egg as well. They are set at -11.5 because of their name, not necessarily because of how dominant they’ll be on the field in 2016.

Week 9 sets up as the best week of college football of the year outside of Rivalry Week. The ACC title and a spot in the College Football Playoff will likely be handed out in Tallahassee when Clemson and Florida State have their annual game to determine who will win the ACC Atlantic Division.

Michigan and Michigan State will be battling to eliminate the other from playoff contention in all likelihood, while Florida and Georgia meet in what might end up being the decisive game in the SEC East. All three games are basically lined at tossups, and that’s what will make this week a heck of a lot of fun for college football bettors.

Even with as great as TCU and Baylor have been in recent years, this week is going to be all about the Tide and the Tigers. Surely, this contest will be played at night in the Bayou, and it’s sure to be a bloodbath that puts not only the SEC West title potentially on the line, but Leonard Fournette’s Heisman Trophy campaign as well.

Remember that Fournette was expected to walk away with the Heisman last year before he ran into Alabama, and that’s when his campaign fell apart and Derrick Henry’s got its first stamp.

LSU has to turn around right after playing Alabama to travel to Fayetteville, and sharp bettors will already have an eye on this one as a trap game. The Hogs shouldn’t be as good as the Bayou Bengals, but you never know how LSU is going to come off of that Alabama game.

The Pac-12 North title could be handed out to the winner of the Stanford/Oregon game as well. The rabid crowd at Autzen Stadium will be eager for revenge.

The Pac-12 has a mini-version of “Rivalry Week” a week earlier than the rest of the country, and the games here are going to be fierce. Cal is expected to take some major steps backwards now that Jared Goff is gone, and that should lead Stanford to an easy victory.

USC and UCLA are always bitter rivals and produce really good games, and the battle for Westwood could have an extra boost this year if the Pac-12 South title is really on the line as could be the case.

There’s just nothing in the world like “Rivalry Week” in college football. Spreads are always tight, the teams always hate each other, and for the most part, the games end up coming down to the wire.

Even though the route for TCU to the playoff this year is tough, this could be the final real hurdle to clear for the Horned Frogs the day after Thanksgiving. They’re dogs in the game, but only by a point to an up-and-coming Texas team that did beat Baylor at this point last year.

Ohio State is giving 6.5 to Michigan in the biggest game in the Big Ten, and it’s entirely possible that this game could be for a bid to the playoff as well. The Buckeyes and Wolverines are both likely to be blemished by now, but it’s possible that at least one, or perhaps neither, will have a loss.

Bedlam. That’s all you really need to say about this game. Oklahoma could very well be in line for a spot in the playoff in Week 14, but it’ll have to avoid the trip against its instate rival. Okie State has ruined the dreams for the Sooners before, and this might be another spot where the Pokes have the last say in the Sooner State.

Which teams should you follow in the 2016 college football season? Check out the teams to watch for the playoff in College Football Playoff Odds and 2016 Picks