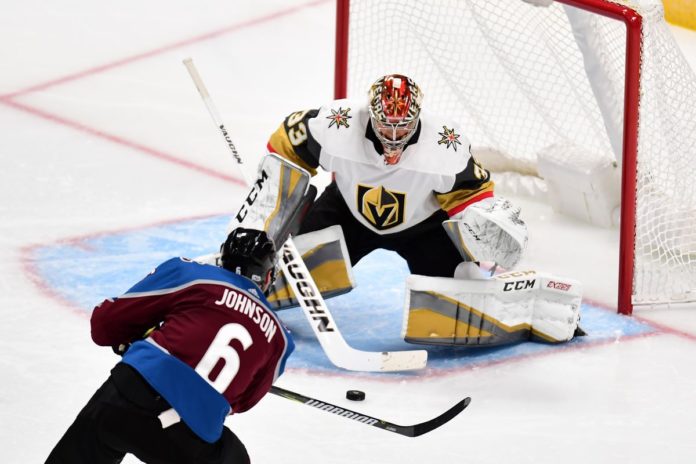 It’s been a short but storied history for the Vegas Golden Knights, who last week earned their fourth straight Stanley Cup playoff berth in just their fourth year of existence. They enter this matchup against the Colorado Avalanche, their closest pursuer in the West Division, riding a nine–game winning streak and with the most points in the NHL. The two have battled for the top spot in the West all season and have split their first six meetings with four of those games decided by one goal. We can expect another close tilt when the teams get together Wednesday in Sin City.

This NHL contest takes place on Wednesday, April 28, 2021 and will air live on NBCSN with puck drop at tip off at 9:30 p.m. ET from T-Mobile Arena. BookMaker.eu will have betting options for every game on the NHL schedule.

It had been a relatively smooth season for the Avalanche until recently when they were put on COVID hiatus due to a breakout. They had three games postponed and were off for over a week working through the issue. Not using that as an excuse since they won their first game out of the shut down, but the Avalanche struggled in their next two games with key players missing.

The stoppage also interrupted a pair of home games meaning Colorado will be playing its fifth straight on the road. The back-to-back losses leave Colorado four points behind Vegas and just one point ahead of surging Minnesota. Prior to their losing streak the Avalanche were on a heater with payouts in five straight games and seven of nine.

While the Lanche saw their heater get extinguished by St. Louis, the Golden Knights continue to make money for their backers. You don’t see recent expansion teams in any league have the success Vegas has enjoyed and this group might be the best yet. Even better than the first-year squad that made a run to the Stanley Cup Final. It’s hard to win games yet Vegas is making it look easy. A 5-1 pasting of Anaheim on Saturday ran their win streak to nine and they’ve outscored opponents 40-15 in that span going over the total six times.

The good news is that the Avalanche are getting closer to full strength. Leading goal scorer and second-leading point producer Mikko Rantanen was taken off the COVID list ahead of this game and we could see him on the ice. That would be a boost for the offense, though much isn’t needed. Colorado has six players with 14 or more goals on the year and leads the NHL with an average of 3.6 goals per game. Rantanen will also help out on the power play, which converts 24 percent of the time.

To beat Colorado you must find a way to slow down Nathan McKinnon. He has seven goals and 18 points over his last 10 games and is third in the league with 60 points. Taking penalties has been a concern. The Avalanche are seventh in the league in penalty minutes per game and they can’t afford to give Vegas any extra man power advantages.

Strong five on five play and solid special teams will get you to the top of the standings in a hurry. And that’s exactly what the Golden Knights have. They are among the top-5 in goals per game averaging 3.4 while ranking second in goals against with an average of 2.1. They also possess the second-best penalty kill in the NHL, which helps keep the goals down. If there is an area that needs to be addressed it’s the power play. Vegas ranks 24th with a success rate of 18.2 percent.

The teams are closely matched in the standings because they are remarkably similar in the stat categories. And that’s been evident in the previous matchups. They’ve split the first six games with four of them decided by one goal. And five of the matchups played below the posted total of 5.5. They split two games in Vegas with Marc-Andre Fleury posting a 1-0 shutout in the initial encounter. Fleury has been dominant in net with 2.09 GAA, .926 save percentage and five shutouts.

The teams matchup well in a number of categories, but Vegas has a big advantage in net with Fleury. Colorado will be without starting netminder Phillip Grubauer and likely turns to Devan Dubnyk. That’s not a huge drop, but considering the opponent Vegas has to have the upperhand on the moneyline.