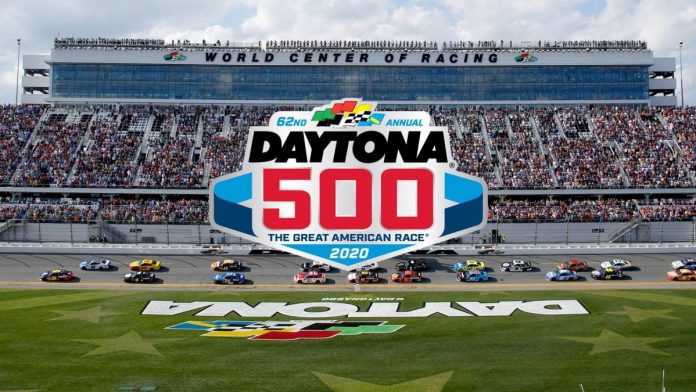 Ladies and gentlemen start your engines! The Great American Race will take place on Sunday, February 16, kicking off the chase for the NASCAR Cup Series championship. Kyle Busch is the favorite to win the Daytona 500 per the auto racing betting odds, but he has never won this race, and that is the one thing left for the two-time champion to do in his career.

It’s going to be difficult for Busch to win the Daytona 500, as he is starting in 28th place. He came agonizingly close to winning this race last year though, so you can’t count out the defending NASCAR Cup Series champion. Kyle Busch was neck and neck with Joe Gibbs Racing teammate Denny Hamlin in lap 198 of last year’s race, but he lost the lead shortly before lap 200 and couldn’t catch Hamlin in overtime. Busch’s older brother, Kurt Busch, won this race in 2017, and while we have seen fathers and sons both win this race, we have yet to see two brothers both win the Great American Race.

Denny Hamlin claimed the checkered flag in 2016 and 2019, and he is considered one of the favorites at Daytona. Hamlin has yet to win a NASCAR Cup Series title, but he has been excellent at super speedways over his long career. He has finished in the top five at Daytona in six of the last eight years, and he also won at Talladega back in 2014. Hamlin is one of the most seasoned drivers in NASCAR, so he is typically one of the favorites week in and week out. He will be starting in 21st this Sunday, but if someone is going to win from the middle of the pack, it’s likely to be Hamlin

Joey Logano has the best value on the board. Logano has been very impressive at the Great American Race in recent years, claiming the checkered flag in 2015 and finishing in the top six in each of the last five years. He has the best starting position (third) of all the race favorites, and he has been considered one of the six best drivers in NASCAR for five of the last six years. Logano has been excellent at long tracks over the last couple years, and I wouldn’t be surprised if his odds dipped below 10 to 1 on Sunday morning.

If you’re looking to take some chances, there is some value in a few of the longer shots too. Jimmie Johnson and Ricky Stenhouse Jr. are both 22-1 to win the Daytona 500, and both drivers have a decent chance of winning the race. Johnson is the most decorated active driver in the sport, winning the NASCAR Cup Series title seven times, and he won his second Daytona 500 back in 2013. Meanwhile, Stenhouse won the shootout to start off in the pole position, but his odds are long as he has only finished in the top ten at Daytona once in his career.

Former champion Austin Dillon has some value at 40-1 as well. He is starting in 13th, and he is driving the No. 3 car. Dillon has finished in the top 20 in all of his Daytona 500 appearances to date.