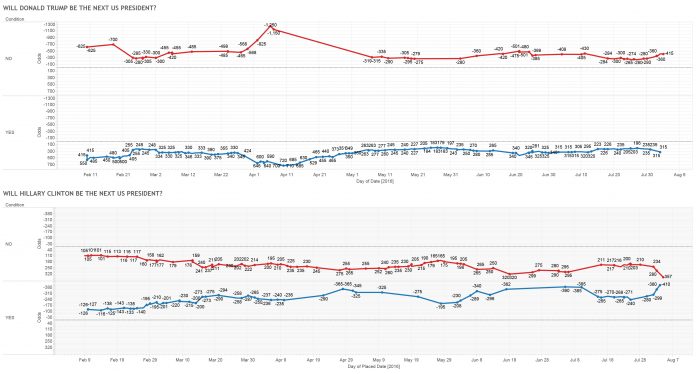 It’s been a rollercoaster ride of an election thus far, with presidential candidates’ odds varying wildly from week to week. Donald Trump and Hillary Clinton’s odds to win the presidency have risen and fallen multiple times and this time we’ll look at some of the events that spurred a large change in the betting odds for Election 2016.

Was Hillary Clinton Always This Popular?

Hillary Clinton has been an odds-on favorite to win the presidency for the past six months and her odds to become the next POTUS continued to increase even after she lost the New Hampshire Primary to Bernie Sanders on February 9.

She was a -126 favorite then, but bettors had seen that polling in the next states set to have their primaries, Nevada and the southern states, overwhelmingly favored Clinton and wagered on her accordingly. After her dominant Super Tuesday performance, she moved to a -210 favorite to become the next POTUS and continued to rise for the next three months.

Donald Trump Winning Against the Odds

Donald Trump was initially seen as a long-shot to win the Republican nomination, much less the presidency, when he announced his candidacy on June 16, 2015. However, as the calendar turned over into 2016, he was continuing to rise in the polls and although he didn’t win the first Republican Primary in Iowa, he scored a big win in New Hampshire and grabbed a lead he wouldn’t relinquish.

Trump was a +550 underdog to be named the POTUS after winning New Hampshire and became a popular bet in the weeks to follow. His dominance on Super Tuesday made him the clear favorite to win the Republican nomination and his odds to become the POTUS fell to +248 after that.

It didn’t take long for Trump’s odds to again shoot up, though. In mid-April he was a +720 underdog to win the presidency after dominant performances by Ted Cruz in Utah, Wisconsin, and Colorado raised major questions of whether or not Trump could compete outside the East Coast.

Further still, his controversial comments and the actions of his campaign manager Corey Lewandowski did not endear him with many in the public and that raised serious concerns about his ability to win the presidency.

However, Trump stormed back after this hiccup and after Paul Manafort took over most of the duties of running Trump’s campaign, he waltzed to victories across the Mid-Atlantic and New England.

After Ted Cruz and John Kasich both bowed out of the contest following Trump’s win in Indiana, Trump picked up victories until officially securing the Republican nomination on May 26. It was at this point that Trump’s odds were at their nadir as well.

Should We Trust Convention Bumps?

With the nomination in hand, Trump was down to +179 to become the next president and opinion polls at the time were promising. He was in a virtual dead heat with Hillary Clinton across a number of outlets, but that was short-lived and soon Clinton was dominating him in public opinion polls.

The Hillary Clinton odds were at their lowest point following Super Tuesday around the same time that Trump was in his best position according to the sportsbooks. She was a -195 favorite to win the presidency in late May as Trump had locked up the Republican nomination and she was still competing against Bernie Sanders. A couple weeks after, Sanders finally conceded and Clinton’s odds rose to -340, where they remained steady until the conventions.

Convention bounces are normal. Following four days of free media for a party on national television, the base is fired up and wants to show support for their preferred party and that leads to swings in the public opinion polls and thus the odds.

What Happened After the Republican National Convention

After the Convention, Trump was in his best position in some time. He was down to +195 to win the presidency following the RNC and the polling showed that he was once again neck and neck with Hillary Clinton. However, his post-convention bump was seen as average by many political pundits and paled in comparison to Clinton’s bump the next week.

Following some memorable speeches at the Democratic National Convention, public opinion again swung in the favor of Clinton and so did the betting odds. She currently sits as a -410 favorite to be named the next president and the average poll over the last week shows her with around a seven percent lead over Trump.

Who Will Be the Next President?

There’s still three months left in the race to see who the next president is and the odds will continue to fluctuate during that time period. The Green Party’s convention is being held this weekend and that has the potential to create a small change in the betting odds. Stay tuned for future updates on the presidential betting odds as other major events happen.

For the latest in U.S. Presidential Election betting odds from now through November, follow our Political Odds section.