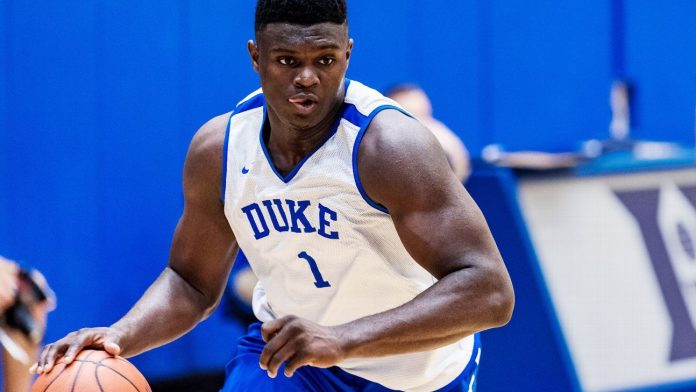 The first matchup between the Duke Blue Devils and North Carolina Tar Heels was one Duke wants to forget. It lost superstar Zion Williamson due to a knee injury very early on in the contest and then proceeded to lose the game in blowout fashion. The Blue Devils are on the road in the rematch and there is a lot on the line in this one.

The Tar Heels are tied with Virginia atop the ACC with Duke one game back. Additionally, UNC and Duke are both ranked in the top-3 nationally and are angling for a No. 1 seed heading into March Madness. Regular season stakes don’t get much bigger than this and it will be interesting to see if the Blue Devils put up a better fight the second time around.

Duke has a record of 26-4 on the season. It has gone 14-3 in the ACC, and that includes two losses in the past five outings. Duke lost its most-recent road game and this one certainly will be tough against a raucous crowd.

Zion Williamson is on the Sideline

Williamson went down against North Carolina when his foot busted out of his shoe and forced his leg to slide at an awkward angle. He has not played since and seems unlikely to suit up for this one. He is going to be the No. 1 overall pick in the next NBA draft and there is a debate about whether he should play at all the rest of the season.

The Tar Heels must be glad Williamson is on the sideline, as he is averaging 21.6 points, 8.8 rebounds, 2.2 steals and 1.8 blocks per game on the year. Williamson is shooting a sparkling 68.3 percent from the floor and Duke has not been as dynamic in his time off the floor. His absence is going to have an outsized effect on the spread. Double check Williamson doesn’t return for this one before the tip but it seems unlikely.

Duke was a solid favorite to win the first game between these teams but Williamson got hurt and the rest of the contest also went North Carolina’s way. The Tar Heels took a 10-point lead into halftime and then pulled away after intermission.

Luke Maye had a fantastic game, scoring 30 points on 14-of-24 from the field. North Carolina’s defense was impressive, as it held Duke to only 34.7 percent shooting from the floor. The Blue Devils were led by R.J. Barrett, who had 33 points, but he did not get much help. Barrett is Duke’s leading scorer and figures to put up big numbers once again in this one.

Duke is on the road and without its best player, so it would be understandable to consider the Tar Heels the favorite in this one. However, the oddsmakers still feel good about the Blue Devils’ ability to hang in. Duke is a talented team but the loss of Williamson has made things tough on them. The betting public is likely to back the Tar Heels, but this is a good one to go against conventional thinking. The Blue Devils are the right choice to pull off the road upset just like North Carolina did to them.