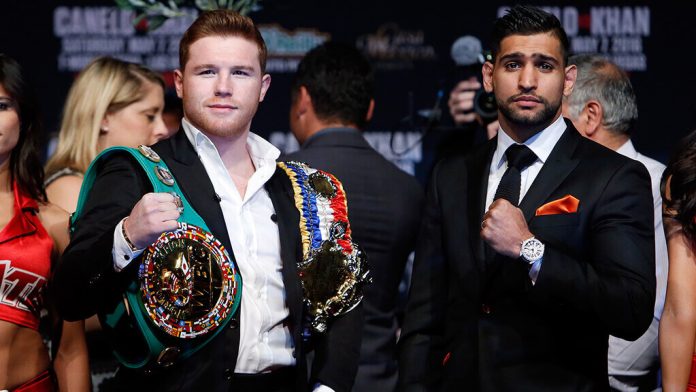 With the likes of Floyd Mayweather Jr. and Manny Pacquiao out of the way, Saul “Canelo” Alvarez is left standing as one of the best pound-for-pound fighters in the world. Alvarez is defending his WBC middleweight title at a catchweight of 155 pounds against Amir Khan on May 7 in Las Vegas in a match that will have some of the biggest fight odds of the year.

Alvarez is the -485 favorite in fight betting lines for this bout at BookMaker.eu, and he’s expected to get the job done relatively easily. Even though this middleweight fight is scheduled to go 12 rounds, the over/under for the brawl is just 9.5 rounds.

Then again, when you’re 46-1-1, and your only loss is to Mayweather, one of the greatest boxers of all-time, you’re going to get that type of distinction.

The man nicknamed “Canelo” has had a fantastic career. It’s tough to think that he’s only 25 years old, as he’s been fighting professionally since the age of 15 with nearly 100 ring appearances between his amateur and professional careers.

He’s taken care of a lot of the top dogs in the middleweight division, including arguably his biggest career victory in his last fight against Miguel Cotto in November.

Alvarez is known as an offensive fighter with a powerful counterattack, and when he really gets rolling, he’s known to land some devastating blows. The power that he’s got behind his right hook in particular has landed him a whopping 32 knockouts over the course of his 48 fights, and that’s why this brawl isn’t expected to go the full 12 rounds.

If there’s a knock on Alvarez’s game, it’s that he’s potentially susceptible to Amir Khan’s counterattack. That said, opponents often end up landing less than half of their punches against Khan because it’s just so darn hard to get anything in on him.

Khan is taking a big risk here stepping into the ring with a middleweight. Even though this is a catchweight fight, Khan is still basically coming up two weight classes to fight Alvarez. If he pulls off this upset, it’ll clearly be the biggest win of his career and one of the biggest for a British fighter in the nation’s history.

Khan has been toying with the welterweight division for the most part. He’s beaten Julio Diaz, Luis Collazo, Devon Alexander and Chris Algieri with relative ease in his last four fights, all of which were decided by unanimous decision.

Amir Khan Is Making a Gamble

This gamble, though, isn’t one that we can see paying off in our WBC picks. Khan is a much more defensive fighter than Alvarez is. He’s going to try to limit the number of opportunities here for Alvarez to strike, but if he gets caught with just one really good hook or jab, he’s going to be in trouble.

We’ve seen Khan get knocked out before, albeit almost four years ago against Danny Garcia, but this is a really big step up in weight class and competition for a man who is used to torching the welterweight division.

Khan deserves a lot of respect, but he isn’t winning this fight. His best case scenario is stretching this one the full 12 rounds and hoping for a decision, but against a man who is knocking out two-thirds of his foes, that’s a tough result to forecast.

Amir Khan and Saul Alvarez are scheduled to rumble at the MGM Grand Garden Arena in Las Vegas on Saturday, May 7, 2016. The night of boxing begins at 9:00 p.m. ET and can be seen live on HBO.