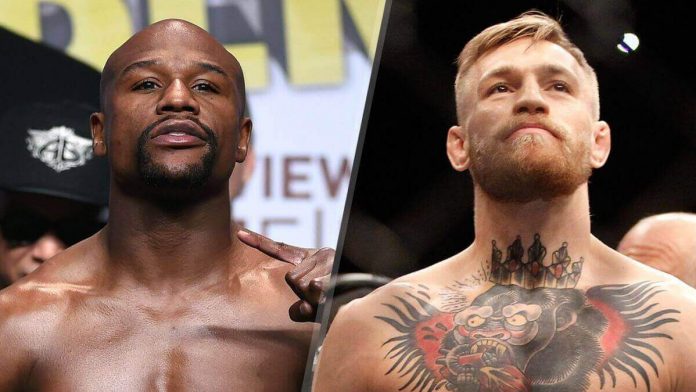 It was inevitable that the two biggest names in combat sports would end up linked to each other. Over the past few weeks, rumors have run rampant that “retired” boxing superstar Floyd Mayweather Jr. and the UFC’s Conor McGregor would face each other in a crossover match.

While Dana White quickly shot down any possibility of the bout in the near future, that didn’t stop a groundswell of media speculation. Fight forums quickly filled up about who would win if the pair faced off in a MMA fantasy fight. And of course, oddsmakers did their thing and made some fantasy odds.

In a boxing match between the two, a few major sportsbooks like BookMaker.eu set Mayweather as a massive -2000 favorite, with McGregor at +900.

Frankly, it’s surprising that Mayweather isn’t even greater chalk. In Money’s last fight against Andre Berto, the Hall of Famer closed at -3000 with Berto at +1300. So basically, oddsmakers are giving McGregor – a cage fighter with zero pro boxing experience – a better chance to beat Mayweather than a world-class boxer.

This is probably a good time to remind you that oddsmakers also set the price based on betting volume projections. McGregor has scores of passionate fans, particularly from his native Ireland, that will blindly back one of the top UFC picks – even if it’s not a UFC fight. That has a major impact on how the fantasy sports betting lines are set.

Without thinking about logistics such as what weight the fight would take place at, trying to break down a boxing match from a fight perspective is ridiculously easy. McGregor is not a boxer. It doesn’t matter that he can throw a hard punch. He doesn’t know the finer nuances of the game, and he’d be up against the best pugilist of the generation.

Of course he’d be completely outclassed. ESPN senior boxing writer Dan Rafael stated that Mayweather would “toy with him, humiliate him, make him look worse than a novice amateur and knock him out even though he’s not a puncher.” But what if the situation were reversed?

It’s interesting to note that sportsbooks only set the lines for a boxing match, so we have to go out on limb here and project our own in an MMA scenario. Perhaps oddsmakers know there’s no chance in hell Mayweather would agree to a cagefight – or any scenario where he could be humiliated.

Of course Maywweather would be dismantled in a UFC fantasy fight. Any boxer would have a fit defending takedowns or submissions, would be lost in a clinchfight and have no answer for kicks. Though Mayweather may be one of the best defensive boxers ever, he’d have no idea what the hell to do against a simple leg kick.

Will This Fight Ever Happen in Either Sport?

No matter how many times either Mayweather or McGregor tweet that they’re interested in the bout, there is just way too many obstacles for any chance it’ll happen in the near future. McGregor is under a nice, fat UFC contract – a multi-fight deal that should extend for the next few years.

Forget about an MMA match. Mayweather is a businessman and the A-Side, of course he’s going to set the rules in his favor. He would never, ever, agree to a fight that he knows he would lose. If the two ever end up meeting, it’ll be in a boxing ring.

On the other hand, it’s not impossible to see McGregor agreeing to a boxing match. Why? Because the Irishman could arguably get paid more in a one-off than all his UFC fights combined. Like Mayweather, “The Notorious” loves money, and a pay-per-view match against McGregor would bring in truckloads of greenbacks.

(Editor’s Note: Click here to learn how you can get $10 free to bet at Bookmaker.eu)