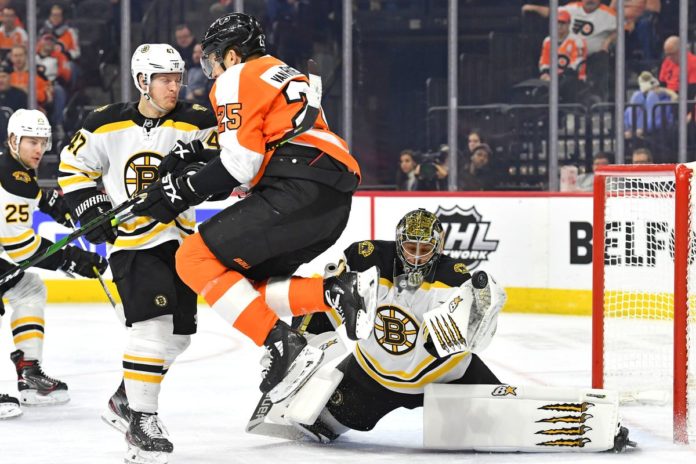 Two of the NHL’s most historic franchises, the Boston Bruins and the Philadelphia Flyers play on Sunday for a potential East Division playoff preview in Lake Tahoe. Boston is leading the East Division with one of the best records in hockey. The Flyers are one of the NHL’s best offensive teams but are starting to show weakness defensively.

The Flyers have five wins in their last seven games and have gone over the total in three of their last four games. Philadelphia has a record of 8-3-2 with 9-4 over the total putting them third in the East Division (four points behind the Bruins). NHL metrics have the Flyers 6th for goal scoring, 15th for the power play, 20th for goals against, 30th for shots allowed, and 28th for the penalty kill.

Those defensive stats, especially for shots allowed, are concerning. Last year Philadelphia tightened up defensively without sacrificing offense. That has not been the case this year and is beginning to harm goalkeeper Carter Hart’s performance.

The Bruins have five wins in their last seven games. Three of their last four games have gone under the total. Boston brings a record of 10-2-2 with 6-8 under the total and currently leads in the East Division standings. NHL metrics show the Bruins 18th for goal scoring, 8th for the power play, 3rd for goals against, and 3rd for penalty killing.

The Flyer’s goalie, Carter Hart, is feeling the strain of the Flyers’ weakening defense. Hart has a .895 save percentage and 3.61 goals against average. Those stats show how he’s been struggling due to lack of defensive support.

The Bruins’ goalie, Tuukka Rask, has a .905 save percentage with a 2.51 goals against average.

The Bruins have won all four games against the Flyers this season. with three of those four games going over the total.

Philadelphia’s poor defense and penalty killing is key. The Bruins have one of the best power plays in the NHL and will exploit those weaknesses on Sunday.