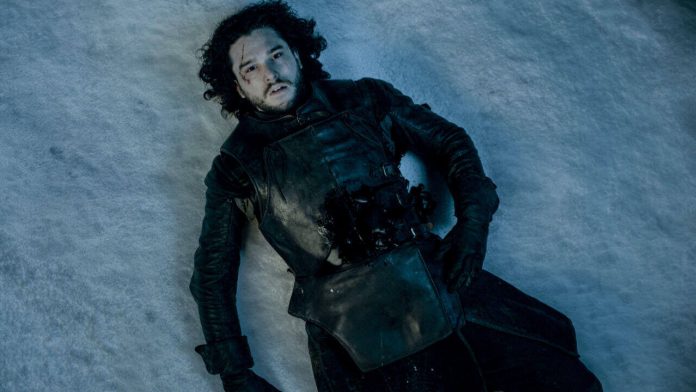 The highly anticipated return of Game of Thrones Season 6, the Emmy-winning fantasy drama, delivered a massive ratings record: “The Red Woman” was an all-time best for the series, with 10.7 million viewers. That number includes the on-air premiere, the show’s first two repeats and early returns from the network’s two streaming services, HBO Go and HBO Now.

Do Thrones fans care about that? Sure they do. But they care more about who’s going to die next! What are our Game of Thrones predictions for Season 6?

Who Will Die in Game of Thrones Season 6?

For starters, Snow is still dead. But for how long? Alliser Thorne has only given Ser Davos and a handful of Snow loyalists until nightfall to surrender and leave Jon Snow’s body, and knowing how the show can transcend time and all of its limitations, we’re looking at a storyline that could feasibly go on for episodes.

Some fans love that, while others loathe it. (See: “The Walking Dead” with its stunner “Glenn is dead” episode, only to later reveal he did not die, and was instead beneath someone else who got killed. Or something like that.)

Let’s check out the best options for a Game of Thrones bet for the season. Without further adieu, the Dead Pool.

Next Character to Die on Game of Thrones Odds

My money is on Theon or Alliser Thorne, but I gotta tell ya: I wouldn’t rule out the inimitable Tyrion, played by award-winner Peter Dinklage. It’s the kind of unexpected development that sends fans into a tizzy, and Dinklage has not only wrung everything he can out of the character, he’s killing it on the big screen, most recently starring in Melissa McCarthy’s The Boss. He’s the longest of shots at 50 to 1, but that’s a monster payday, too.

Thorne has sweet odds of 15/2, and is probably the safer bet.  The treasonous ringleader has the stink of Snow’s bloodied body on him; although his reasoning was that the murder was necessary because Jon’s poor judgment – he made peace with the hated Wildlings – would have destroyed the Night’s Watch.

This renders Thorne a character fans are going to want to see killed off too, as opposed to a character like Tyrion, where the collective gasp would be heard on the other side of the world.

But there are other matters to attend to. For instance, what about Arya Stark? When will she regain her sight this season? The answer is surely yes, which makes the bigger question, WHEN.

When Will Arya Stark Regain Her Eyesight?

I believe it will be one of the final episodes of the season, but Episode 2 could offer up a surprise in this department, and the 10-1 odds are nice. For ten bucks you’re making a hundred. What’s better than that?

Who will be the ruling King or Queen of Westeros at the end of the series? This is really anybody’s guess, and will no doubt be as scrutinized an ending as that of HBO’s other monster hit The Sopranos.

Who Will be the Ruler of Westeros?

Jon Snow back-from-the-dead basically leads the pack odds-wise at Bovada, which goes to show just how dead someone can actually be on this show. 5 to 2 odds? Really? There should be a category for what episode he turns back up in too. These GOT odds seem off to me, but maybe I’m missing something.

Sure, it could be Tyrion, and fans would probably vote for this to be the outcome if given the chance. But I doubt it will be. If he makes it to the series’ end he’s going to go out in much grander style. Go with a Targaryen for the win!

HBO released a statement this week that Game of Thrones is their most successful series in their storied history. That being the case, look for things to get bigger. And ballsier. Loosely translated, there will be money to make.

Keep up with the latest entertainment and political odds at BigOnSports. Check out 2016 Election Odds: Hillary Clinton vs. Donald Trump