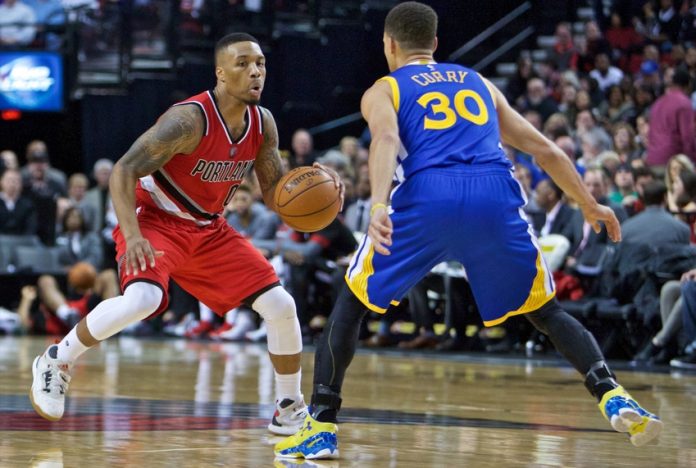 The way the Golden State Warriors are playing, it seems like no one in the Western Conference will be able to hang with them in the playoffs. The Portland Trail Blazers would love to question that hypothesis, and a win next time out against the defending champions would give them some confidence.

Portland is among the top contenders to Golden State’s throne. The talent gulf between the teams is pretty wide but the Blazers will host the Warriors this week. Portland will certainly give Golden State its best shot in the matchup. The Warriors are expected to be the favorites but this one could be a competitive matchup.

Golden State has been nearly unbeatable of late but Portland hopes to prove there is a crack in the armor somewhere by pulling out the upset.

Portland is 33-22 on the season. The Blazers are in the middle of a crowded pack of teams in the West, which means every win and loss is critical. Portland believes it has a chance to win this game because it has gone 23-8 at home on the year. Both of these teams can score points in bunches so the scoring total will be very high in NBA odds.

The Warriors don’t have the easiest lead-up to this game. It is the third game in four days for Golden State. The first two are at home, but the Warriors have to get on a plane after facing off against Utah on Wednesday and then travel to Portland for the second game of a back-to-back.

The All-Star game is coming so the players will get some time off after this, but it’s fair to wonder if the Warriors will be fatigued for this matchup. For a team so reliant on its jumpshot, it is certainly something that should be considered as it could have an outsized effect on the spread.

The Blazers have a star in Damian Lillard leading the way, and he is expected to get his points in this matchup. However, Portland only seems capable of pulling out the win if the Robin to his Batman also plays well. McCollum did not look good in Monday’s loss to the Thunder, scoring 13 points on just 5-of-20 shooting from the floor.

He is averaging 21.3 points per game on 46.2 percent from the field and 36.6 percent from three-point range. If McCollum is efficient in this one, the Blazers may be able to hang around. If not, his team will be in trouble.

The reason: The Trail Blazers have to rely on their top two guards to play well. The Warriors, meanwhile, can afford an off night or two from some of their stars and still win because there is so much talent. Portland is going to keep this one close, but when Kevin Durant and Stephen Curry are both putting up big point numbers, there is little any opponent can do.

The Warriors are the pick to win this game. The spread is something to watch closely because the Blazers may be able to cover.