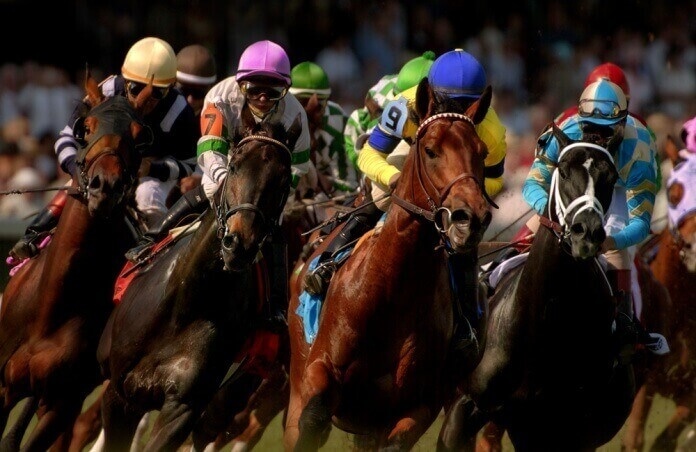 Twenty horses are set to go to post at the 142nd running of the Kentucky Derby on Saturday night at Churchill Downs. There is certainly a lot to love and a lot to hate about many of these colts, and we’ll look at the Kentucky Derby favorites by breaking down each contender based on their post positions and odds.

1: Trojan Nation (50/1) – Not much to see here. Trojan Nation has never won a race and is only here because the Wood Memorial had a hard time filling the field. He finished second at the Wood but isn’t worthwhile.

3: Creator (10/1) – The Arkansas Derby winner is getting a lot of respect here for a colt who needed six tries to break his maiden. We’d stay away at all costs.

4: Mo Tom (20/1) – Perhaps our favorite horse in this field for the price. If jockey Corey Lanerie had kept this horse out of trouble in the Louisiana Derby and the Risen Star Stakes, he would’ve surely won both of these races and would be probably the second favorite to win the Kentucky Derby. Tremendous value here.

5: Gun Runner (10/1) – The anti-Mo Tom. Gun Runner was the right horse in the right place at the right time at the Louisiana Derby, but we don’t think he has what it takes to hold off this field at the Kentucky Derby.

6: My Man Sam (20/1) – Were the oddsmakers wrong about My Man Sam? BookMaker.eu had him lined as low as 12 to 1 as recently as three days ago. The runner up in the Blue Grass Stakes showed a lot of heart in a huge comeback, and he could be a factor on Derby Day.

7: Oscar Nominated (50/1) – The biggest waste of a post in this field. Oscar Nominated is a turf horse who got lucky to win the low-class Spiral Stakes, a race which really shouldn’t even be worth Derby Points anymore.

8: Lani (30/1) – No Japanese horse has ever won the Kentucky Derby. Neither has a UAE Derby winner. That’s two big strikes against Lani that cannot be ignored.

10: Whitmore (20/1) – Whitmore has been working out well, but he never did win a graded stakes race this year, and that concerns us for sure.

11: Exaggerator (8/1) – Many believe this is the best in this field for horse betting, and we’re not going to disagree. Exaggerator has four straight races with 100+ Beyer Speed Ratings, and his close at the Santa Anita Derby was flat-out awesome.

12: Tom’s Ready (30/1) – Remember Mr. Z last year? He was stubbornly run in all of the Triple Crown races and was raced a ton even though he never really had all that much talent. That’s Tom’s Ready this year. He’s got nine races already under his belt and not one of them tells us he’s ready for the 2016 Kentucky Derby.

13: Nyquist (3/1) – It’s really hard betting against an undefeated horse. It’s also really hard betting on a 3 to 1 horse at the Kentucky Derby. We have no doubt that Nyquist is the most impressive three-year old in this race, but we’re not convinced this price is worthwhile.

14: Mohaymen (10/1) – A great price on a great horse. Yes, Mohaymen was beaten soundly by Nyquist at the Florida Derby in April, but if you’re a believer that that was just one race, don’t forget that he’s been a horse racing favorite basically everywhere else he’s gone and was unbeaten before running into Nyquist.

15: Outwork (15/1) – The Todd Pletcher/John Velazquez jockey/trainer combo usually does wonders, and Outwork should be remembered as a horse who is a head away from being 4-for-4 in his career.

16: Shagaf (20/1) – Shagaf put up a dud in the biggest race of his career at the Wood Memorial, but his last two training sessions were four furlongs in 47 and 4 and four furlongs in 48 and 2. Those numbers mean outstanding Derby odds, and they definitely make Shagaf a contender.

17: Mor Spirit (12/1) – An interesting pony. Mor Spirit was the favorite to win the Santa Anita Derby, and he hasn’t been less than 5 to 2 yet in his career. If Gary Stevens is ever winning another Derby, this is the horse he’s doing it on.

18: Majesto (30/1) – Here we have another horse who took five tries to break his maiden and happened to finish second in a 100-point prep race. Look elsewhere.

19: Brody’s Cause (12/1) – Some seem to have forgotten that Brody’s Cause won the Breeders’ Cup Juvenile last year. He was also incredibly impressive in a relatively comfortable win against a good field at the Blue Grass Stakes. If this price of 12 to 1 holds, you’ll want to put Brody’s Cause in your exotics.

20: Danzing Candy (15/1) – No horse was hurt more by the post draw than Danzing Candy. He’s a big speedball and badly needed a single-digit post. We don’t see him competing and lasting the full 1 1/4 miles with what he’s going to need to use early to get to the head of the pack out of the No. 20 slot.

Why Nyquist is a top contender and a more detailed look at some of the other horses among the Kentucky Derby favorites: Kentucky Derby Futures: Nyquist Opens as Favorite