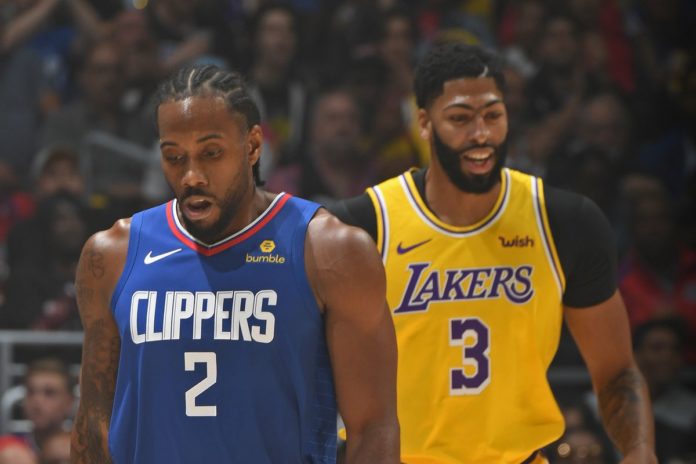 It’s been a tough stretch for the Los Angeles Lakers as they continue to play without superstars Anthony Davis and LeBron James. And just when it looked like help was on the way recently signed Andre Drummond sustained a foot injury in his team debut. The Lakers remain a favorite to repeat as NBA champions since both AD and LeBron will be back in time for the playoffs, but the road getting there is going to be bumpy. The Lakers and Los Angeles Clippers will meet for the first time since opening night when they hook up for the Sunday Showcase.

Sunday’s game will air live on ABC with tip off at 3:30 p.m. ET from Staples Center in downtown Los Angeles. BookMaker.eu will have betting options for every game on the NBA schedule.

The Lakers built up enough of a cushion during the first half of the season winning 21 of their first 27 games so they could withstand any type of adversity that came their way. They probably didn’t expect their top two players to be out of the lineup for an extended period of time. While James and Davis recuperate, they are just treading water. AD went down in Denver on Valentine’s Day and including that setback the Lakers went 1-5 SU and ATS in a six-game stretch.

Just when it looked like they figured out how to win without AD by going 6-2 SU and 7-1 ATS over the next eight games, James sustained an ankle injury. They dropped four straight after LeBron was hurt ending the slide with wins over Cleveland and Orlando, teams fighting to stay out of the cellar in the Eastern Conference. Against a stiffer opponent in Milwaukee that mini-streak came to an end 112-97.

The Clippers are dealing with their own injury concerns but they’ve fared much better. Paul George, Marcus Morris and Patrick Beverley have all missed time in the last week and recent acquisition Rajon Rondo has yet to play. Still, the Clippers won six straight knocking off East powers Philadelphia and Milwaukee in the last two of that streak.

The Clips were also perfect against the spread in that run. We’ll have to wait and see who is healthy enough to play on Sunday, but the Clips have a better chance of getting players back in the lineup than the Lakers do at this point. The Clips got a 116-109 payout win in the first meeting on Dec. 22 with George scoring 33 points and Kawhi Leonard going for 26.

The Lakers have dealt with bad luck recently. Losing AD and LeBron to injury was bad enough then Drummond goes down with a toe problem during his team debut. The good news is that Drummond won’t miss a lot of time. But the Lakers are treading water until James and Davis are ready to return. “We don’t worry about that (injuries). We worry about the guys in uniform. We know we have enough. We have a deep team. We’ve been playing better basketball and we know we can win,” Frank Vogel said.

Montrezl Harrell is doing his best to pick up the offensive slack. He scored 19 points against the Bucks and is averaging 20.3 points with three double-doubles in six games without James. Over that same span the Lakers are scoring fewer than 100 points per game and need another strong defensive effort to contain the Clippers.

The Clippers finally ran out of gas as their six-game winning streak came to an end against Orlando. Playing without George, Morris, Beverley and Serge Ibaka they were outscored 66-45 in the second half of a 103-96 setback. “When you’re down guys and you’re on a back-to-back, I think it’s just tough trying to keep guys minutes down as much as we could,” Tyronn Lue said. The Clips are trying to stay ahead of the Lakers while tracking down Denver for the No. 2 seed in the West. It’s a tough balancing act to make sure players are ready for the postseason.

Several reserves thrust into a more prominent role made the most of their minutes. Luke Kennard scored 17 points against the Magic and Reggie Jackson had 15. Nicolas Batum pulled down 10 boards with five assists. The Clips will lean on Leonard during this time. He scored 28 points against Orlando and is averaging 26 points over the last five games.

Our staff’s best bet: Los Angeles Clippers and UNDER

The Lakers will do their best to compete but it’s tough without two of the best players in the league on the shelf. We’ve seen them struggle to score and win games since James went down. There is a lot of offensive firepower on the shelf giving value to the UNDER. And the Clippers will never be LA’s favorite team no matter how hard they try. So they better beat the Lakers when they can. And they can on Sunday.