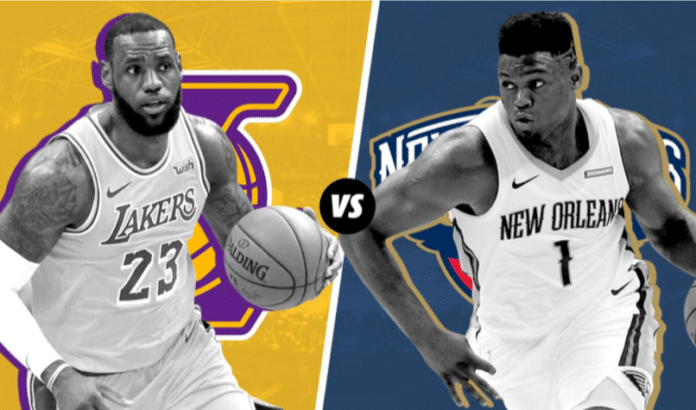 Winning an NBA title isn’t easy. Going back-to-back is even more difficult. The Los Angeles Lakers are finding out the road to another Larry O’Brien Trophy is filled with potholes. Star LeBron James went down last week with an ankle injury joining fellow All-Star Anthony Davis on the shelf. LA was humbled in its first game without LeBron and will look to figure things out against the New Orleans Pelicans when the two collide on Tuesday night.

Tuesday’s game will air live on TNT with tip off at 7:30 p.m. ET from Smoothie King Center in New Orleans, LA.

The Lakers will find out how the other half lives over the next few games now that LeBron and AD are both out. They had a tough time adjusting to life without Davis, and just when it seemed like they had it down James messed up his ankle. Playing without their two superstars the Lakers were catching 10 points in Sunday’s matchup with Phoenix. It was the first time they were a double-digit dog since the end of the 2018-19 season. Things didn’t turn out well with the Lakers suffering their second straight setback 111-94. They built a big enough cushion over the first half winning 21 of their first 27 games, including their first 10 on the road. LA has the most road victories of any team in the league and has won seven in a row over the Pelicans going 4-2-1 ATS in that span.

Last week was a microcosm of the Pelicans’ season. They coughed up a 17-point fourth quarter lead to Portland and lost by eight points a few days later. They rebounded with an impressive 113-108 win at Denver to end the road trip. We’ve watched the Pels cough up a number of leads to lose games they could have and probably should have won. They also play some of their best ball against the top teams. Three of their last four victories were over West powers Denver, the Clippers and Utah. They also dropped home games to Chicago and by 30 points to the NBA worst Timberwolves all this month. They are an exciting team to watch averaging and allowing just over 115 points per game with the OVER going 29-13.

They stumbled immediately after Davis was shelved losing five of six games. They picked up the slack after that winning six of eight and four in a row until LeBron sustained an ankle injury Saturday against the Hawks. The Lakers dropped that game 99-94 and were crushed the following night by Phoenix. James could miss significant time with a high ankle sprain and Marc Gasol has yet to return from the league’s safety protocol. They will have to make some adjustments.

The starting lineup for the Phoenix game consisted of Markieff Morris, Wesley Matthews, Kentavious Caldwell-Pope, Kyle Kuzma and Dennis Schroeder. The offense was stagnant connecting on just 41 percent of its shots. “These challenges strengthen you throughout the course of a season … and will benefit you come playoff time,” Frank Vogel said.

Showing they can run with the best teams in the conference, the Pels have wins over Utah, the Clippers and Denver just in the past few weeks. And they should feel good about their chances of ending a lengthy losing streak to the Lakers. They are dealing with their own injury issues. Lonzo Ball missed the Denver game with a hip flexor and is questionable for the contest against his former club. J.J. Redick has missed the last several games and isn’t expected back until next month.

Ball’s absence didn’t affect the offense against the Nuggets. As long as Zion Williamson and Brandon Ingram are on the floor things will be just fine. They each scored 30 points in the win, the third time they each scored 30 points in the same game this season. Even when opposing defenses know what’s coming it’s hard to stop. Zion averages 25.7 points while BI drops 23.9 per game. They help the Pels score 115.3 points per game, the fifth-highest in the NBA. They’ve failed to reach the 115-point mark in the last six games against the Lakers going winless in that stretch.

The Lakers struggled when AD went down and I don’t think they have the magic wand for how to deal with the absence of James. They still have one of the best defensive teams and they can frustrate opponents. We’ve seen the Pels crumble when the offense isn’t working and that’s something the Lakers can lean on. “We have enough offensive firepower and we have a defensive mentality with our group so to me we have enough to win,” Vogel said. I agree with him and like the Lakers to get the road win.

Check out the latest NBA odds.