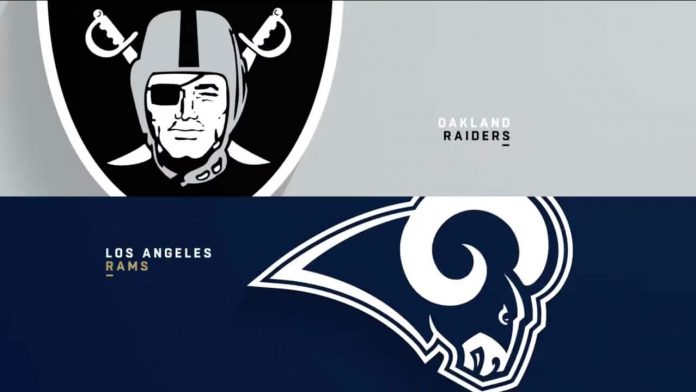 The Oakland Raiders are facing an offense that might be among the best in the NFL this season. What’s worse is that they just traded away their best player on defense, superstar pass-rusher Khalil Mack, who just had a dominant showing Sunday night for the Bears. That  could be significant as the Raiders welcome the Los Angeles Rams to Oakland for the regular season opener on “Monday Night Football.”

The Rams were one of the most pleasant surprises in the NFL a season ago and have loaded up for a Super Bowl run. They might be away from home to begin the season but Los Angeles will enter this game expecting to win, and the oddsmakers agree with that likelihood.

The Raiders hope the departure of Mack doesn’t spiral the season and it will be interesting to see how the players respond.

The game between the Los Angeles Rams and Oakland Raiders will be held at Oakland Coliseum in Oakland, California at 10:20 p.m ET on Monday, September 10th, 2018 and nationally televised on ESPN.

The Rams are entering this matchup as four and a half-point favorites. The betting public really likes them at the spread as they are receiving nearly 80 percent of the action to cover. The Raiders are the +207 underdogs on the moneyline to pull the upset at home, while Los Angeles is the -250 favorite. The scoring total is listed at 47.5 points, with the “under” the more popular choice.

Raiders running back Marshawn Lynch was limited in practice this week because of a groin injury but has been deemed healthy and should be good to go. The Rams added Marcus Peters and Aqib Talib to the secondary this offseason and have Ndamukong Suh and Aaron Donald on the interior to rush the passer. The Raiders need to establish the running game and Lynch will be the main part of it.

Los Angeles could be without linebacker Mark Barron, who is dealing with an ankle injury. He is a former safety who has made the transition into the box and is a nice player. Even if he sits it won’t have an impact on the spread as the Rams are still plenty talented on defense.

Rams’ Donald is Player To Watch

Mack was traded because he and the Raiders couldn’t come to terms on a contract extension. Donald held out during the preseason but he and the Rams did come to an agreement on a lucrative extension and now they have him back in the fold.

Donald and Mack may be the two most talented defensive players in the NFL. The fact that one of them has departed for the Bears and the other will be active in this game is a huge turn of events. Donald and Suh will be an absolute handful at defensive tackle for the Raiders’ offensive line to handle. Don’t be surprised if Donald gets a sack in this game.

It’s never easy to win an NFL game on the road, but the Rams have everything it takes to capture this one on their way to a successful year. The defense has been upgraded while the offense still boasts quarterback Jared Goff and running back Todd Gurley.

The Raiders need a big day from Lynch and quarterback Derek Carr. It’s unlikely they will be able to keep up. The Rams are the choice to both win this game and cover the spread. The “over” is the choice on the scoring total as Los Angeles has an explosive offense and should be able to clear 30 points in this matchup.

Betting Picks: Rams and the OVER