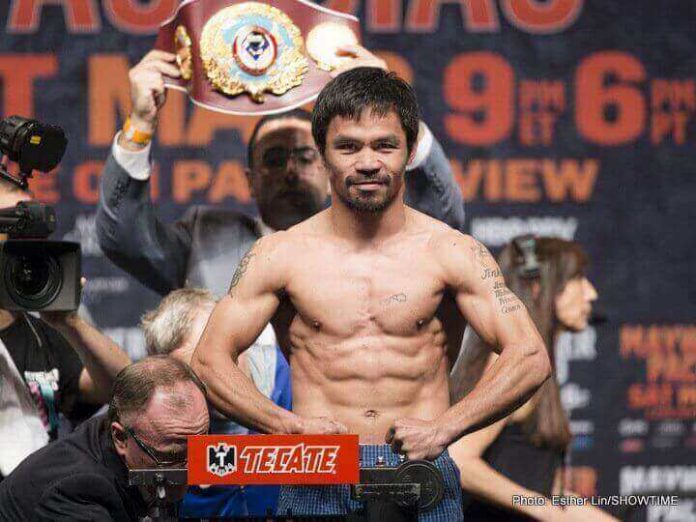 The Filipino superstar and surefire Hall-of-Famer announced recently that he would return to ring on November 5, 2016 to fight WBO welterweight champion Jessie Vargas (27-1, 12 KOs) at the Thomas & Mack Center in Las Vegas, Nevada.

Had Pacquiao stayed retired, I think most of the boxing world would have been happy. This is not anything like Floyd Mayweather’s situation, who retired just one win shy of 50 – and scores of casual fans would love to see lose for the first time. But Pacquiao has nothing left to prove or earn – besides a giant payday.

At 37, Pac-man is clearly not the fighter he was eight years ago, when he was terrorizing the welterweight division with blinding speed and power. That didn’t stop oddsmakers at BookMaker from making him a massive favorite in the boxing picks.

The fight marks the first title defense for the 27-year old Vargas, who knocked out Sadam Ali this past March to claim the belt. Prior to that, he knocked out Timothy Bradley in the 12th round after losing all 11 frames prior. It was a stunning upset that put the Las Vegas native on the map.

“I am happy to be scheduled to fight Pacquiao. He is a fighter that the fans respect and admire,” Vargas said in an ESPN.com interview. “That’s exactly what I want, and beating him will put me in the that position. To prove that I am the best I have to beat the best and I plan on showing off my talent and ability inside that ring November 5. It will be my coming out party.”

Vargas is probably understating his excitement here. A pay-per-view bout against Pacquiao means a life-changing payday for any fighter. While many were expecting Manny to select unified champion Terence Crawford as his comeback fight, Pac-Man instead chose a fighter that would bring scores of Hispanic fans to the table.

As is the case with other boxers of Mexican descent, Vargas fights with heart and aggression. It’s a much more fan-friendly matchup than one against the defensive-minded Crawford, which would probably give Pacquiao nightmare flashbacks of Floyd Mayweather Jr.

If you’re going to bet Pacquiao to win – which is an expensive proposition – it’s best to put in your wager on the fight odds now. We’ve got a little over three months until fight night, which is a lot of time for gamblers to cause movement. I expect most of the action to be on Pacquiao.

First, it’s not like he’s been out of action for a long time, so ring rust won’t be a factor. But it’s the power differential that makes Pacquiao such a big favorite. While Vargas was able to down a few high-profile names, he’s not a big puncher by any means. That could prove fatal against Pacquiao.

It’s not in Vargas’ nature to fight defensively or outbox his opponents. There is a high probability that we’ll see a few toe-to-toe exchanges between the two, in which case Pacquiao will pile on the damage. While the Filipino senator hasn’t knocked out anyone in years, he’s still hurt plenty of folks with his fist. He’ll likely do enough to take a unanimous decision.