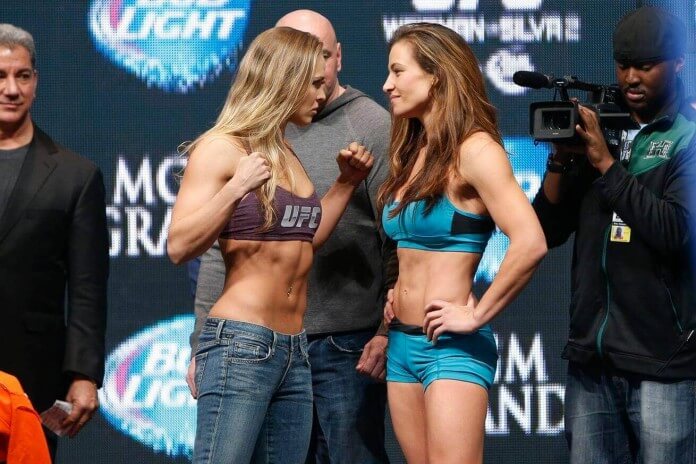 The pair has squared off twice, with Rousey handily winning both times. A lot has changed since then, but not when it comes to the fight odds. As with their previous encounters, Tate will enter the match as a huge underdog.

Holly Holm, Rousey and Tate provide the perfect example of why MMA math doesn’t work – and how the MMA odds can be dangerous from a betting perspective. Holm beat Rousey who beat Tate who beat Holm. While we shouldn’t make assumptions based on who beat who – because in sports gambling the distributive property rarely works – it is impossible to discuss Rousey vs Tate III without discussing all three women.

Tate’s strength is her wrestling, but rolling on the mat is the last thing you want to do with a savage grappler like Rousey. While Holm exposed her rudimentary standup, Rousey is still an elite submission artist. This is a problem for Tate, who is a decent striker at best. On the feet, she is certainly not skilled enough to follow the same blueprint that Holm did.

However, what Holm did was shatter Rousey’s invincible aura. And she did it with a measured game plan and a disciplined approach. Those are two characteristics that any professional fighter can prepare and apply for a bout. Fittingly, Tate is arguably the most experienced women’s fighter on the roster, having been around women’s MMA since its infancy.

There’s a reason why Tate is such a big underdog even though she beat the girl who worked over Rousey. But there are a lot of questions too.

We have no idea how hard Rousey has been training. She’s been busy making movies in Hollywood and shooting swimsuit shots for Sports Illustrated, so we can at least surmise that a full celebrity schedule leaves less time in the gym to shore up the holes in her game. If Dana White convinces her to come back for UFC 200 in July, it gives her approximately four months to wrap up her films and put together a full training camp.

And now that every one of her future opponents will try and drag her into deep water, it is more important than ever for her to make sure she’ll be able to tread water late in a five-round fight. She was noticeably gassed in just the second round of her fight against Holm. As the only fighter to ever see a third round with Ronda, Tate has to be encouraged after seeing Rousey wilt under Holm’s precision.

We’ve seen a crazy amount of upsets lately, and Tate could very well pull one off again. She’s one of the most resilient fighters in the MMA field, and a master in capitalizing on mistakes. Of course, she’s never really had a close fight with Rousey, and it could just be one of those situations where the former champion has her number.