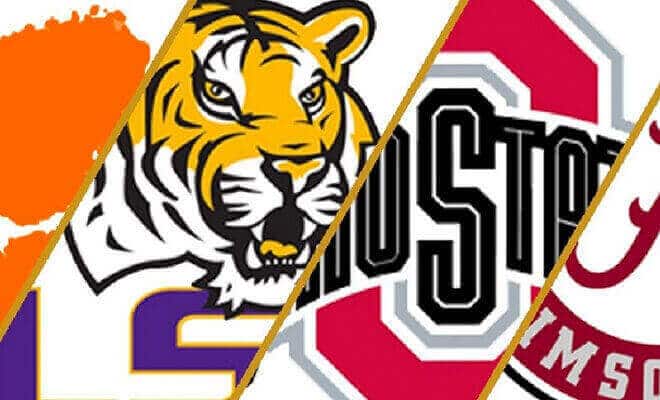 The advent of the College Football Playoff has made it substantially harder to figure out who is actually going to be the last team standing on top of the mountain with the National Championship trophy in hand.

However, the four-team postseason also makes it so teams which lose relatively early still have a real shot to get back into the thick of the fight.

This year, perhaps more than either of the first two years of the CFP, could be the craziest of the bunch knowing that there’s no such thing as a runaway NCAA favorite team to win it all.

The Alabama Crimson Tide are the overwhelming favorites at +550, but we have to realize that this price really isn’t all that great in relation to what we’re used to with some of the favorites.

The SEC schedule is going to be brutal as always, but no one can build a defense quite like Nick Saban can. The Tide have lost a slew of great players to the NFL over the years, yet they keep reloading rather than rebuilding. Still, it’s going to be really hard to replace Derrick Henry in the backfield as well. Alabama is sure to be exposed.

In the ACC, it seems almost inevitable again that either the Clemson Tigers (+850) or the Florida State Seminoles (+1000) will be in the playoff, and in all likelihood it’s all going to come down to the game the two are going to play against each other in Tallahassee to determine that.

Clemson was in the title game last year, and Dabo Swinney’s side returns a slew of talent, including perhaps the best college quarterback in the nation in Deshaun Watson. Still, FSU has been gaining ground fast on the NCAA football odds due to the fact that Phil Steele thinks it has the best team in the nation.

The Seminoles return basically their entire team from a year ago minus Jalen Ramsey, and though that’s a huge loss, it’s also a boatload to return as well. The Noles ended up losing three times, but over the course of the last three years, they’ve won a title, played in the playoff and lost in a New Year’s Six game. That’s not a bad resume at all for a team with 18 returning starters.

However, the best value in our eyes lies with the LSU Tigers (+1200). The Bayou Bengals are going to have to go through the bloody SEC West just like Alabama will, but we think Les Miles has assembled a team which can get the job done this year, particularly if Leonard Fournette can rumble his way to a Heisman Trophy.

History suggests that when Miles has a veteran college team around him, he can pull off some great heists. With Fournette and a defense with nine returning starters, LSU has the team to beat in the SEC as we see it instead of Alabama.

Odds To Win the National Championship