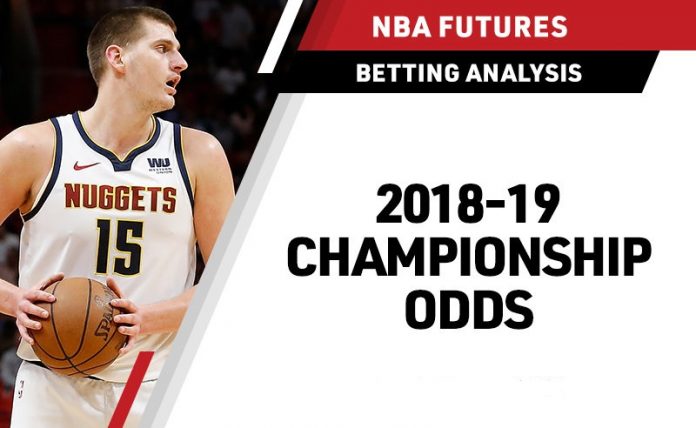 The All-Star Break has given everyone in the NBA a chance to recharge their batteries for the stretch run. It’s not surprise that the Golden State Warriors are once again the favorites to win another championship. They found a groove over the past several weeks to zoom to the top of the Western Conference as they should enter the playoffs as the No. 1 seed.

After the Warriors, it is a muddled group when it comes to the top contenders. The Milwaukee Bucks and Toronto Raptors have been the class of the Eastern Conference and get the advantage of not having to go through the Warriors to make the NBA Finals, which improves their championship odds.

The Houston Rockets, Denver Nuggets and Oklahoma City are some of the top teams in the West. Below is a look at where teams check in when it comes to title odds in NBA futures.

The Warriors didn’t have the best start to the season but ever since DeMarcus Cousins hit the court, they have been nearly unbeatable. Golden State is listed as the odds-on favorites at -238 to win yet another championship. It’s a steep price but the Warriors are that good, and they are unique in the respect that they can absorb an injury to a key player and still be the favorite.

The Bucks have the next-best odds, but they are still quite a bit behind Golden State, as Milwaukee comes in at +965. The Bucks have the best record in the NBA at the All-Star break but the lack of playoff experience leads many to believe they are still a year away from true contention. However, Milwaukee is certainly an intriguing choice as it has the best point-differential in the NBA and beefed up the team at the trading deadline.

The Boston Celtics haven’t put everything together yet this season but the oddsmakers are still showing them respect as they come in at +995. Boston has the capability to turn it on at any point and the Celtics could very well make a great postseason run. The Raptors are right behind them at +1035, as they have hit another gear after the offseason acquisition of Kawhi Leonard.

The other main contender in the Eastern Conference is the Philadelphia 76ers. They have an impressive starting lineup of Joel Embiid, Ben Simmons, J.J. Redick, Jimmy Butler and Tobias Harris. At +1350, this is a strong underdog choice to win the championship.

The Oklahoma City Thunder has the second-best odds in the Western Conference behind the Warriors, but at +1685 odds. The Houston Rockets are right on their heels at +1850. Even though the Nuggets have been in second place for most of the season, their odds are way up at +3300.

The Los Angeles Lakers have struggled through a rough season, but for those that believe in LeBron James, this is the time to put in an NBA futures bet on the Lake Show, as they come in as longshots at +6300.

The Warriors are huge favorites to win the title, but really, who is going to stop them? The Rockets are not playing as well as they did last season. The East has some good teams but no one that is quite elite. Milwaukee and Philadelphia should be considered as longshot wagers, but in the end the Warriors are the right choice even as the odds-on favorites to win the championship.