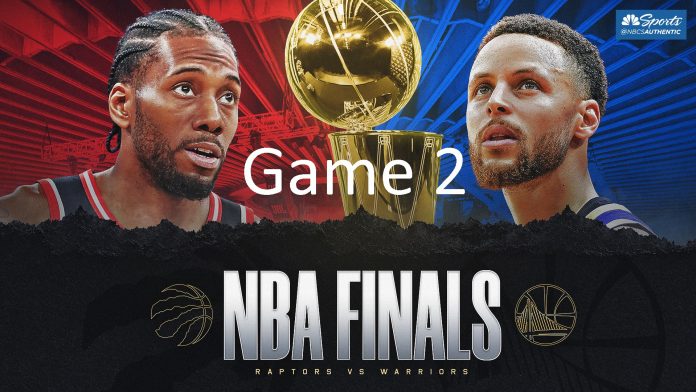 The Toronto Raptors looked like old pros in their first foray into the NBA Finals. The Raptors were fantastic in Game 1, pulling ahead of the Golden State Warriors and keeping their foot on the gas to strike the first blow in this series.

The Warriors are still the favorites to win another championship but things could get dicey if they don’t capture Game 2 and even this series up. There is a lot on the line in this one, and the Raptors will no doubt be feeling confident as they play in front of their home crowd once again. The spread is a small one once again as the oddsmakers believe either side can come out on top.

The Raptors are listed as 2 point favorites to claim Game 2, which is the same spread as the first game of the series. Toronto is coming in at -134 on the moneyline while Golden State is the slight +114 underdog. The scoring total is listed at 215 points, which is a couple points higher than Game 1.

The Raptors covered the spread and the “over” was the correct call in the first game of the NBA Finals.

Warriors center DeMarcus Cousins returned from a quadriceps injury in Game 1. He finished the contest with three points, two assists and two steals in only eight minutes of action, so he is clearly not yet ready to make a big impact. Cousins would obviously like to see his time on the court increase and it may come incrementally in Game 2, but he won’t be a star.

Golden State forward Kevin Durant did not play in the first game as he continues to recover from a calf injury. However, Durant did travel to Toronto for the first two games, and the Warriors would love to get him back for Game 2. It is a situation to monitor closely in the lead-up to the contest.

The loss on Thursday was the first defeat in six games for Golden State in the playoffs without Durant.

Raptors forward Pascal Siakam scored 32 points in Game 1. It was an unexpected performance and one that was huge in Toronto’s victory. Siakam shot a dominant 14-of-17 from the field and added eight rebounds, five assists and two blocks.

The Warriors know Kawhi Leonard is going to get his buckets, but the emergence of Siakam last time out helped tilt the contest in favor of the Raptors. It will be interesting to see if Golden State switches anything up defensively in Game 2 or if it forces Siakam to prove he can do it again.

The Warriors didn’t look too good in Game 1 but there is a lot of resolve in the two-time defending champions. Golden State will get things straightened out in Game 2 and pick up the upset victory on the road to knot this series up at a game apiece heading back to Oakland.

There is a lot of momentum behind the Raptors right now, so it may make sense to wait a little while and see if the odds can get even better on the moneyline. The “over” is the right call once again in Game 2 of the NBA Finals.