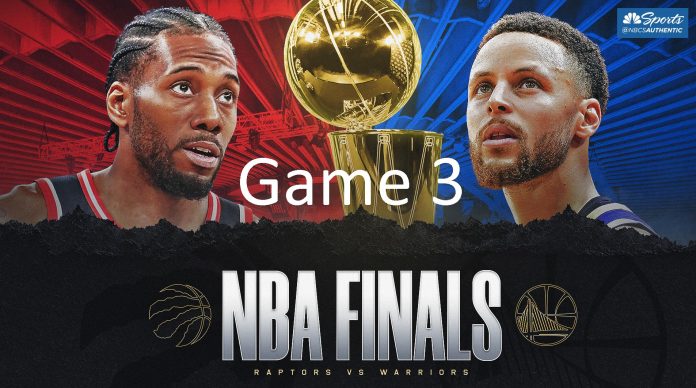 The Golden State Warriors overcame another key injury to upset the Toronto Raptors in Game 2 of the NBA Finals, knotting the series at 1 game apiece. Golden State now gets to head home for Game 3, but the odds will depend on the health of a pair of their stars. Everyone is going to be keeping an eye on the status of Klay Thompson and Kevin Durant heading into this contest.

Toronto missed out on a great chance to take control of the series and now needs to win one of these next two on the road to have a true shot at winning the championship. This is a pivotal game for both sides.

The Warriors are listed as 5.5-point favorites to claim victory in Game 3 and take the lead in this series for the first time. Golden State is -240 on the moneyline while the Raptors are listed at +199 to pull off the upset. The scoring total is listed at 213 points.

The Warriors pulled the upset on the moneyline in Game 2, and the scoring total was a push.

Stephen Curry had 23 points and three steals as the Warriors rallied from a halftime deficit to claim the 109-104 victory. Thompson had an impressive performance with 25 points, five rebounds and five assists but injured his hamstring in the fourth quarter and had to leave the contest. DeMarcus Cousins gave the Warriors a nice boost in just his second game back from a quadriceps injury, finishing with 11 points and 10 rebounds. Andre Iguodala hit a three-pointer with under five seconds remaining to ice the victory.

Kawhi Leonard had a monster game for the Raptors with 34 points and 14 rebounds but did not get enough help in this one. Pascal Siakam finished with only 12 points on 5-of-18 field goals after a monster Game 1 and will need to play better in Game 3 to help give Toronto a chance at the upset.

Thompson got hurt in the fourth quarter and while he told the coaching staff the injury felt minor, it remains to be seen if he will be available for this matchup. He was limping substantially and it’s a huge development if he cannot go, although Thompson was already telling reporters he expects to play in Game 3.

Durant is trying to get back from a calf injury and seems close. His status is just as big of a deal as Thompson’s and if neither can play, it’s a huge blow to the Warriors. But if Durant or Thompson is on the court Golden State will feel good about its chances to win this matchup at home.

There is a lot up in the air right now as Thompson and Durant are two of the best players in the NBA. Curry and Draymond Green are going to play big roles in Game 3 but they are hoping to have a third banana. If neither player can go, the Raptors will be able to take advantage and win this one.

However, the belief here is that Thompson or Durant will see the court and help lift the Warriors to the victory. This game should be close, though, and Toronto will be the choice to cover the spread. The “under” is the pick on the scoring total.