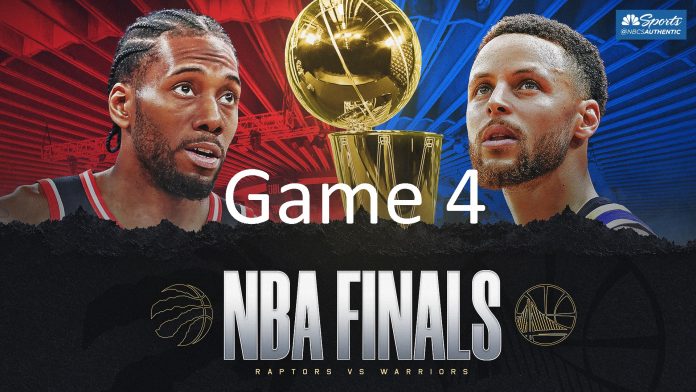 The Golden State Warriors did not have enough firepower to stay up with the Toronto Raptors in Game 3 of the NBA Finals, but a key reinforcement is expected back for Game 4. Star shooting guard Klay Thompson will likely play after missing Wednesday’s loss, and he is sorely needed.

The Warriors are at home for this matchup and will be the solid favorites to come away with the victory and tie this series up at two games apiece. If the Raptors can somehow pull the upset, all of a sudden their chances of winning the championship would surge through the roof.

This game is huge and Golden State will undoubtedly be playing with an extremely high sense of urgency.

The scoring total is listed at 216 points. The Raptors are the -130 favorites to win the title, while the Warriors are listed at +110, so the oddsmakers feel like it is close to a toss-up at this point.

The Raptors needed to take advantage of a short-handed Warriors team in Game 3 and they did so, cruising to the 123-109 win. Kawhi Leonard led the way with 30 points, seven rebounds and six assists while Kyle Lowry contributed 23 points and nine dimes. Pascal Siakam, Marc Gasol, Danny Green, Serge Ibaka and Fred VanVleet also played well as Toronto had the superior depth.

Steph Curry was a one-man wrecking crew for the Warriors, finishing the game with 47 points, eight rebounds and seven assists. However, without Thompson or Durant, the lack of a second scoring option doomed Golden State. Draymond Green had 17 points but no one else on the team had more than 11.

Coach Steve Kerr expects Thompson to be back from a strained hamstring for Game 4, and his presence is sorely needed on both ends of the court. However, Durant has been ruled out once again. He has been out since the second round of the playoffs after suffering a calf strain against the Rockets.

If the Warriors manage to get Thompson and Durant back soon they will be the favorites to win the NBA Finals, but the Raptors are proving to be a worthy challenger. Thompson’s expected return is big but the continued absence of Durant is a blow to Golden State.

The Warriors are dealing with some serious injuries but they have championship mettle and get this contest at home. Look for Golden State to come out on a mission and blow out the Raptors. Thompson’s return will be integral as the Warriors should tie up the NBA Finals with a Game 4 victory.