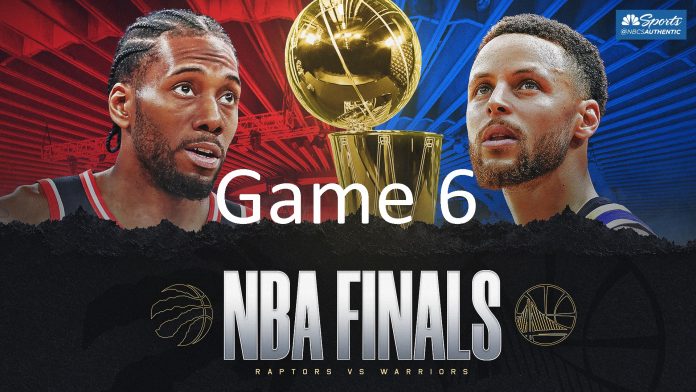 The Golden State Warriors were able to extend the NBA Finals by going on the road Monday and outlasting the Toronto Raptors in a thriller. However, if they are going to win a third straight championship, it will be without superstar forward Kevin Durant. He suffered an Achilles injury after only 12 minutes on the court in Game 5 and looks done for the series.

Even without Durant, the Warriors are back home for Game 6 and will be the favorites to win this contest and extend the series again. The Raptors missed out on their first chance to close out the series but won the first two games at Oracle Arena in the NBA Finals and would love to pull off the trifecta to clinch the title.

The Warriors have been listed as 4-point favorites to claim this Game 6 showdown and force a do-or-die Game 7 back in Toronto. Golden State is listed at -150 on the moneyline while the Raptors are the +130 underdogs to pull off the upset and win the championship.

The scoring total is listed at 211 points. Game 5 resulted in a push as Golden State went into the matchup as the slight 1-point favorite. The “under” was the correct call on the total.

Steph Curry and Klay Thompson hit some huge three-pointers down the stretch as the Warriors erased a six-point deficit and held on for the 106-105 victory. Kyle Lowry had a chance to win the game at the buzzer for the Raptors and clinch the title, but his jumper was off the mark.

Curry finished the game with 31 points, eight rebounds and seven assists while Thompson had 26 points on 9-of-21 shooting, with seven coming from downtown. It looked like Kawhi Leonard was going to lift his team to a championship with a huge fourth quarter, but the Raptors went cold down the stretch and couldn’t close out the victory.

Toronto will need to regroup knowing it blew a fantastic chance at capturing the title.

Durant looked great early on with 11 points but he re-injured his leg while trying to make a move in the second quarter. He immediately went to the floor and he may have suffered a serious Achilles injury. Durant is one of the best players in the NBA and his return gave Golden State a huge boost, but now the Warriors will likely have to go the rest of the way without him.

Warriors forward Kevon Looney also aggravated his chest injury in Game 5 and missed the final portion of the contest. He has been a key cog on both ends of the court and it remains to be seen if he will be available for Game 6.

The Warriors are running on fumes at this point. Toronto is clearly the better team in this series, and while most believe Golden State is going to push this series to seven games, the odds should be ripe for jumping on the Raptors.

Look for Toronto’s offense to flummox the Warriors as the Raptors are going to win yet another road game and knock off Golden State for the title.

Check out the latest NBA Finals betting odds for Game 6.