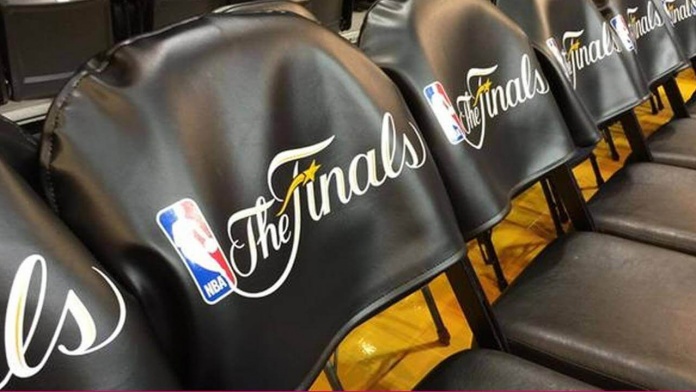 There was never a doubt that the Golden State Warriors and Cleveland Cavaliers felt like they were on a crash course to play in the NBA Finals for the second straight season. Now that the Spurs are out of the way, there doesn’t seem to be much of a chance for either the Toronto Raptors or the Oklahoma City Thunder to push the presumed combatants out of the NBA finals odds.

You have to go back several months to find the last time the Golden State Warriors (-185) weren’t the odds-on favorite to be the champions for a second straight Larry O’Brien Trophy.

There were some scary moments for sure in there, especially when Stephen Curry was injured during the beginning of the playoff series against Portland, but in the end, each of the first two series were finished in five games, and that’s about as good as you can expect.

Curry is back, and he proclaimed his return in Game 4 by putting up 17 points in overtime, single-handedly putting the Dubs on his back in the best individual performance in an OT period in NBA history.

Thunder Has A Tough Battle

And that’s awful news for the Oklahoma City Thunder (+700). Who could forget the shot Curry hit from almost 40 feet away from the basket in overtime to beat the Thunder back in February? Curry had a ho-hum 46 points in that game, including 12 threes.

The Thunder have already pulled off one miracle in these NBA playoffs, though. They were blown out of the water by the Spurs in Game 1 of the last round, and all they managed to do after that against a team that won 67 games was win four of the next five.

Kevin Durant simply took over after the Game 1 loss, averaging 31.0 points per game for the rest of that series. It was the bigs who really turned the tide of that series, though. Steven Adams, Durant and Serge Ibaka proved to just be flat out too big for San Antonio to handle. And the defensive effort from all parties saw a surge as well.

If the Warriors can’t figure out how to stretch out all that size and make Billy Donovan pull some of the bigs off the court, this could end up becoming an issue for Golden State as well. That’s Oklahoma City’s only shot.

And there are some in the sharp betting community that really do believe the Thunder have a shot. The series odds for the Thunder to win have fallen from +450 to +325 in the NBA betting lines in just a few short days.

Meanwhile, the Eastern Conference really has proven once again that it isn’t all that good. It’s the Cleveland Cavaliers (+185) and everyone else. And we’re not sure you could make an All-Star team of the other squads in the East and come up with a winning roster to beat the Cavs.

The supporting cast around LeBron James is just so much better this year than it was a season ago. Kevin Love looks a lot more comfortable and confident as a stretch four, and J.R. Smith and Channing Frye have really done a fantastic job knocking down threes. But more important is the good health of Kyrie Irving.

Irving is actually leading the team in scoring at 24.4 points per game here in these playoffs, and he might be the best asset James has ever had with him as a player this deep in the year, even better than Dwyane Wade or Chris Bosh.

The Toronto Raptors (+5000) are a nice story, but there’s a reason they’re one of the longest shots in basketball betting to win the 2016 NBA Finals we’ve ever seen entering the conference finals. The Raps had to fight through seven games to beat both the Pacers and the Heat.

This is the first time the Raptors have been in the Eastern Conference Finals in the team’s history, but at +10.5 in the opening game in Cleveland on Tuesday, most won’t expect them to win more than maybe one contest in this series.