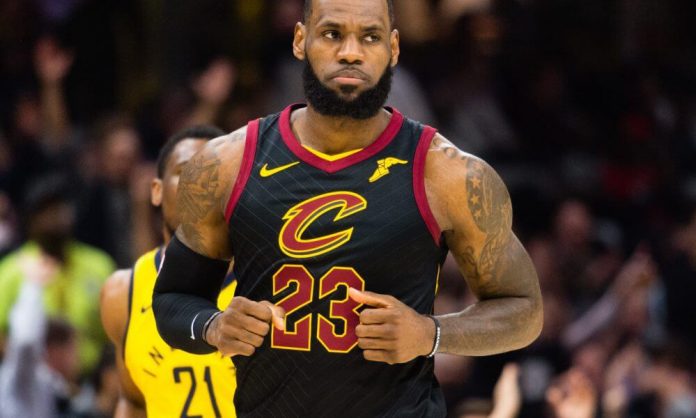 As long as LeBron James is still playing, the Toronto Raptors likely won’t be playing for an NBA title. The King and his Cavs have ousted the Raps the last two postseasons and they’re at it again. Cleveland travelled north of the border to open their Eastern Conference semifinal series and came away with a pair of victories, putting the whammy on the Raps once again. The series isn’t over and anything can happen, just like we didn’t expect the Cavs to take the first two games from the No. 1 seed.

And the West’s top-seeded team finds itself in a heated series as well. The Houston Rockets dropped their first home game of the postseason to even their series with the Utah Jazz at 1-1. Rookie Donovan Mitchell helped vanquish last season’s MVP Russell Westbrook and the OKC Thunder in the first round. Now he’s trying to oust this year’s MVP James Harden.

The Rockets won Game 1 easily, and according to Mike D’Antoni, too easily. After the Rockets were beaten in Game 2, the coach said his team was “lulled to sleep” by Utah’s Game 1 performance. I think that 116-108 loss was a wake-up call. With Harden hitting 7 of 12 triples in Game 1, the Rockets shot 53 percent from behind the arc and cruised to a 14-point win, their third straight by double-digits. But the shots didn’t fall in Game 2 and the Rockets find themselves in a battle. They’ll keep shooting triples because that’s what they do, and they’ll be better than the 27 percent they hit on Wednesday.

Utah’s team concept has worked beautifully and just like in their opening series against the Thunder, the Jazz stole homecourt advantage with a Game 2 win. The Jazz have yet to lose at home this postseason, but they haven’t beaten the Rockets all year and just ended a five-game drought in Game 2. Utah is unflappable and they’ve proven that all season. They built a 19-point lead on Wednesday, only to give it all back and more. Yet they made plays down the stretch behind Mitchell and Joe Ingles, who scored 27 points, to get the victory. They’ll need to play stellar defense again because they just don’t have the offensive weapons to hang with the Rockets.

27 – With Harden making only 2 of 10 three-pointers in Game 2, the Rockets were atrocious from behind the arc hitting just 27 percent of their shots. And that’s a figure that isn’t going to get it done. Houston will continue to launch triples since it is in their DNA, and I expect they’ll shoot a higher percentage. They made and attempted the most threes during the regular season and connected on over 36 percent. So their performance was an aberration and they will be better.

The Jazz made the proper adjustments for Game 2 and it resulted in a victory that gave them homecourt advantage. Being more aggressive at the three-point line, Utah let Harden and Co. have the lane if they wanted, and left Rudy Gobert to defend the paint. Teams have rarely taken the Rockets out of their game, but the Jazz did so in Game 2. Now, it’s time for Houston to adjust and I believe they do. They’ll also make a higher percentage of shots which will result in a road victory.

The Raptors are in a deep hole and LeBron is shoveling dirt on them. This was supposed to be the year Toronto broke the spell the King has on them and at least get beyond Cleveland. But after dropping the first two games at home, the Raptors have to dig deep. They were outscored by 20 points in the second half of Game 2 and they couldn’t stop James, Kevin Love, and everybody else who was on the floor for the Cavs. If the Raps are to get back in the series, they’ll have to end their eight game playoff losing streak to the Cavs and win in Cleveland for the first time in their last six visits.

We had a J.R. Smith sighting in Game 1 and Love made an appearance for the first time this postseason in Game 2, and the Cavs closely resembled the team that averaged 111 points during the regular season. James carried the club to a first-round win over Indiana when the Cavs were probably the second-best team. James again did his thing dropping 43 on Thursday and Love added a postseason-high 31 as the Cavs cashed the over for the fourth straight game.

It’s hard to beat a team that shoots 60 percent, and the Raptors didn’t have a chance on Thursday. Love was averaging fewer than 11 points per game and was held to single digits four times in his first 11 playoff games. But he busted loose on Thursday, hitting 11 of 21 shots for 31 points. James was 19 of 28 from the field for 43 points and the two combined for 74. Everyone chipped in and the Cavs made 50 of 84 attempts for a blistering 59.5 percent.

The Raptors have to be saying “here we go again” after watching LeBron dismantle them twice. Toronto has dropped eight straight playoff games to the Cavs and they’ve lost five in a row at the Q, so things aren’t looking good for the visitors. But the Raps were a resilient group during the regular season and they didn’t earn the top seed by rolling over. They’ll come out and play, but LeBron and the rest of the Cavs are rolling after taking the first two north of the border.