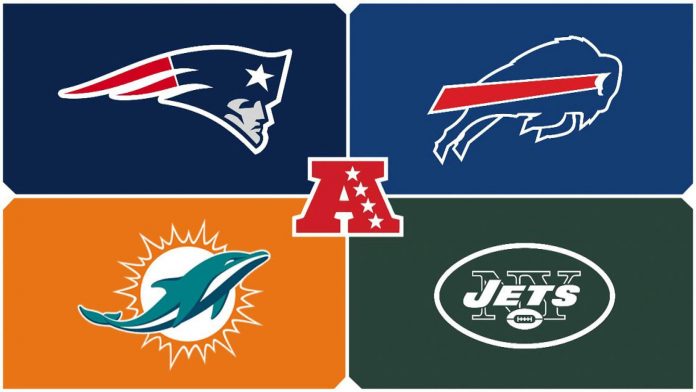 The AFC East has been owned by the New England Patriots over the last nearly two decades and 2018 doesn’t appear to be any different. There are questions surrounding the Pats, mainly the age of Tom Brady and the loss of Julian Edelman for the first quarter of the season. But even that isn’t enough to deter oddsmakers from setting the Pats as a heavy favorite. In fact, New England is the heaviest favorite at -680 to win any division in the NFL.

The Pats have won the East for a league record nine straight seasons and 15 times in 17 seasons since Brady became the starter. We can throw away the 2008 campaign when Brady went down in the opener with a knee injury and the Pats finished second. That means the duo of Brady and Bill Belichick were denied the division crown just one time. That’s a remarkable run. The Pats could slip to nine or 10 wins and still claim the division with a group of rebuilding teams.

Are the Pats really worth taking a wager on?

That’s the big question. Bettors will have to put down a good chunk to see a worthwhile return, but it will likely pay off for the 10th season in a row. New England’s dominance starts within the division where the Pats have won nine of the last 10 games against their AFC East foes. Over the last five seasons they are 22-8 against the Jets, Bills and Dolphins with Buffalo and New York winning just two games in that time.

New England is easily the best team in the division heading into 2018, but that will change soon. Brady will be 41 by the time the season starts and he looked old and slow in the Pats’ Super Bowl loss to Philadelphia in February. But despite that unusual showing, Brady had another MVP season, throwing for a league-best 4,577 yards with 32 touchdowns. He threw the most passes in the NFL last season and was intercepted only eight times.

There will be some changes to the roster in 2018. Danny Amendola and Brandin Cooks are gone and Edelman will miss the first four games due to a suspension. That leaves holes in the receiving corps. But it also opens up Rob Gronkowksi to have a big season. It doesn’t seem to matter who the Patriots are missing, Belichick is a master at bringing in players to fill needs. He’s done it his entire career and who doesn’t want to play for a team that contends every season?

We thought Brady was done last year, and the year before that. But he keeps coming back for more. As long as he’s running the offense, there are no problems. The Pats led the NFL in total yards last season while finishing second in scoring. They’ve finished among the top-four in points every year since 2010 twice leading the NFL. Defense was an issue in 2018. The Pats ranked 29th in yards allowed, but they stiffened when it mattered, giving up 18.5 points per game to place fifth in the league.

The battle is for second place in the division with the Dolphins getting the early edge at +845. The return of Ryan Tannehill plays a part in that, but the Fins lost some important pieces to their offense. Jay Ajayi, who was leading the team in rushing, was dealt during last season, and the NFL’s leader in receptions Jarvis Landry was traded to Cleveland this offseason. The defense lost Ndamukong Suh and it’s hard to imagine the Dolphins competing, despite the moves that improved team chemistry.

It was a season fans in Buffalo have waited nearly two decades for. The Bills ended the longest active playoff drought by qualifying for the playoffs last season for the first time since the 1999 season. It didn’t last long with an excruciating 10-3 loss to Jacksonville in the wild card game. And it’s hard to argue that the Bills are better heading into 2018. Tyrod Taylor was traded away and A.J. McCarron is the new starter, at least for now, keeping the seat warm for Josh Allen. Buffalo was arguably one of the worst playoff teams and the cloud surrounding LeSean McCoy could be a factor in their expected return to non-playoff combatant in 2018.

The Jets are the longshot at +1500 and they showed competitiveness that few expected last season. With the No. 3 overall pick in the draft the Jets landed what many believe is their franchise quarterback in Sam Darnold. Gang Green hasn’t had one of those since the days of Joe Willie Namath in the early years of the franchise and Todd Bowles isn’t in a hurry to rush the youngster. That means the Jets are at least a year away from contending, but they could finish second if things go their way.