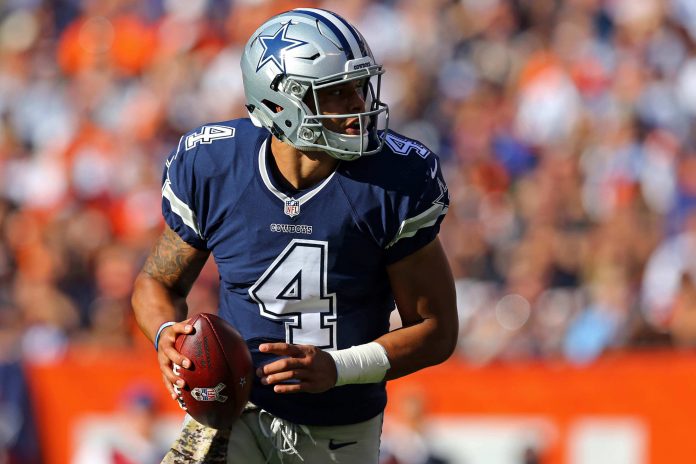 The Dallas Cowboys are absolutely rolling at the moment. They’ve won eight of their first nine games of the season and are -500 favorites to win their division.

They’ve got a rookie quarterback in Dak Prescott who has more or less taken over the starting quarterback role from Tony Romo and another rookie in Ezekiel Elliott who, beyond the fact that he’s a de facto lock to win Offensive Rookie of the Year honors, is the favorite to win the MVP right now as well.

Though the 1972 Miami Dolphins have already popped their champagne, there’s still a question as to whether Dallas can finish out the season at 15-1. The ‘Boys might not have a game left this season on their docket in which they’ll be dogs.

That’s why it’s going to be tough to handicap the NFL odds posted this week when they’ll lose their next game.

Best NFL Betting Price on the Board

The Cowboys opened at -6.5 and have since risen to -7 against Baltimore at home, bringing a moneyline price of -325 along with them.

But the Ravens have a history of playing big games against their biggest opponents in the Jon Harbaugh era, and we’ve seen a little bit of that this year as well with their win over the Steelers.

Baltimore hasn’t lost a game this year by more than eight points, and it has the defensive line that can counter that strong Dallas offensive line. The Ravens rank No. 1 in the league in rushing defense, and if they can find a way to slow down Elliott, the Cowboys could be in for a fight just to carry this prop beyond one week.

A Potential Dallas Upset May Come in Week 14

Aside from that, the best candidate for a loss feels like a game in the Meadowlands in Week 14. Sure, Dallas has to beat Baltimore, Washington, and Minnesota just to get to that point.

But the Giants are the only ones who really have a shot of being favored against the Cowboys in a game that’s going to mean more to them than it will to Dallas, assuming that the latter gets to 11-1 at that point.

If the chalk holds up in these next few weeks, the Giants will be either 9-3 or 8-4 coming into that game with Dallas, and this will represent their last shot to get back into the race in the NFC East. Furthermore, if they slip in any of those games, losing this one could end up being relatively devastating in the Wild Card chase as well.

Again, New York is one of these teams that tends to come up with big results against big teams, and we know there isn’t going to be an intimidation factor here. Odell Beckham Jr. is a walking 200-yard game waiting to happen, and this defense is much better than its statistics show.

The Giants also have a 20-19 win over the Cowboys in Dallas already this season, and securing the season sweep isn’t out of the question.

Let’s Discuss the Rest of the Dallas Schedule

Perhaps in Philadelphia in Week 17 in a game that could end up being meaningless? Maybe against Detroit the day after Christmas if the No. 1 seed in the NFC has already been wrapped up at that point?

The problem with betting on the Cowboys to go 15-1 is the fact that the price for this NFL prop bet just flat out isn’t good. For football betting, this is effectively a seven-game parlay at this point. Even if the Cowboys are favored in every single one of their games, you’re better served parlaying those seven together one week at a time than you are betting on them at +450 to run the table.