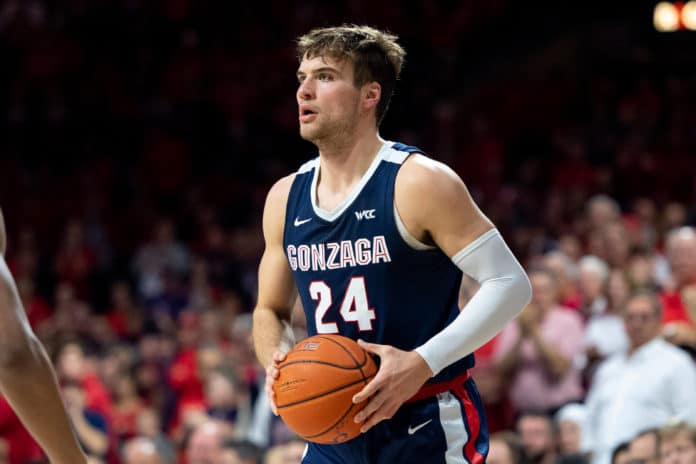 A lot of brackets were busted during the first three days of the NCAA Tournament with a number of upsets. Those who have the Gonzaga Bulldogs winning the title are still feeling good about their chances, though. There was no drama in the Zags first-round shellacking of Norfolk State, but things get more difficult in the round of 32 with a matchup against the Oklahoma Sooners on Monday night. OU survived a tough matchup with Missouri and will again be without second-leading scorer De’Vion Harmon due to a positive COVID test. The Zags are favored to win it all and opened as 14.5-point chalk over the Big 12 Sooners.

This NCAA Tournament game will air live on CBS at 2:40 p.m. ET on Monday, March 22, 2021 from Hinkle Fieldhouse in Indianapolis, IN.

It appeared as though the Sooners rallied around their fallen teammate to knock off Mizzou 72-68 for the first round payout. And after ending the season on a disappointing note they certainly needed a pick-me-up. They were just 1-5 SU and 0-6 ATS in six games ahead of the NCAA Tournament with their only success a 79-73 win over Iowa State in the Big 12 Tourney. The Sooners were favored by 11.5-points on the closing line against a team that didn’t win a conference game. They made the Dance thanks to four wins over top-10 teams during the season, including a run of three straight over Kansas, Texas and Alabama in late January. That success during the middle of the season was overshadowed by how the regular season ended. The Sooners got a jolt from leading scorer Austin Reaves, who tallied 23 points in the win over Mizzou.

They opened the season as the top-ranked team and the favorite to win the national championship. And the Zags haven’t deviated from their plan. The season will end in either historic fashion or a one-loss tragedy. There were no upset thoughts in the first round with the Bulldogs smothering Norfolk State 98-55 for their 24th straight double-digit win. They knocked off Virginia and Iowa in that stretch and also have a win over Kansas in the season opener. Their closest game was an 87-82 takedown of West Virginia back in early December. The Zags opened as a 14.5-point favorite making it 21 straight games laying double digits if the line holds. The Zags are 9-9-2 ATS in the previous 20 games.

The absence of Harmon will likely be felt more in this game than it was against Missouri. An active defender, his work on that end of the floor is going to be more impactful. Harmon started 23 games averaging 12.9 points, 3.4 rebounds and 2.1 assists ahead of the Tournament. Don’t feel too bad for the Sooners, though. They experienced plenty of ups and downs in the ultra competitive Big 12 and won’t be in awe of the No. 1 team.

The guys who needed to step up in Harmon’s absence did just that with Reaves paving the way with 23 points and six assists. Brady Manek hit 5 of 9 three-pointers scoring 19 points and Elijah Harkless had 16 points and 10 rebounds. Each played at least 33 minutes with reserves accounting for only eight points.

We hear the arguments every year about the Zags’ strength of schedule. The West Coast Conference isn’t the Big 12, but to dominate the league every year like the Bulldogs have is commendable. And it’s not like they’re avoiding big matchups. The Zags faced powerhouses Kansas, West Virginia and Iowa in their first four matchups of the season emerging with payouts in two of them. And the offense has been nearly unstoppable. They’ve scored at least 90 points in 15 of their 27 games and boast the highest scoring team in the country with 92.3 points per game.

With so many weapons at their disposal the Zags are too tough to defend. Their fop four scorers average at least 11.9 points and all of them shoot better than 50 percent from the field. Corey Kispert made 8 of 12 shots and was 6 of 9  on his three-point attempts as the Zags shot 55.7 percent overall and 51.9 percent from behind the arc against the Spartans.

The Zags left no doubt with their first round dismantling of Norfolk State and they have only one thing on their mind moving forward. There are likely to be some bumps in the road as the competition stiffens, but Gonzaga is easily the deepest and most well-rounded team in the Tournament. You can’t concentrate on one guy with so many players able to score the basketball. And one overlooked aspect is their defense, which has been solid all year.