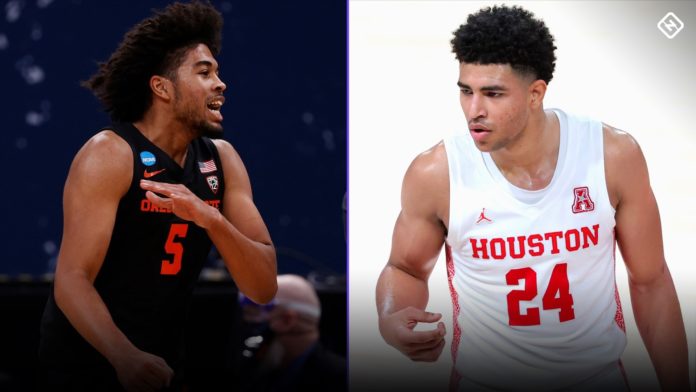 If you said a few months ago that the Oregon State Beavers would be playing for a chance to reach the Final Four, most would have looked at you like you were crazy. Well, if you did say that congratulations, you’re prediction has become reality. The No. 12 seed Beavers wouldn’t even be in the NCAA Championship if not for their surprising run at the Pac-12 tournament where they knocked off three teams that went dancing. Their latest upset was over Loyola-Chicago vaulting them to an Elite Eight matchup with the Houston Cougars. OSU has thrived in the underdog role and opened as an 8-point dog.

This NCAA Tournament Elite Eight matchup will air live on CBS at 7:15 p.m. ET on Monday, March 29, 2021 from Lucas Oil Stadium in Indianapolis, IN.

It’s hard not to think of the Beavers as a team of destiny after what they’ve done in the NCAAs. It all started a few weeks ago at the Pac-12 tournament. Entering as the No. 6 seed with a record of 14-12, they got hot at the right time. It’s something you weren’t expecting from a team that lost early season games to Portland and Wyoming. The Beavers believed in themselves and it paid off with wins over UCLA, Oregon and Colorado – all NCAA Tournament teams – to snare the Pac-12’s automatic bid. That just seemed to build the confidence level taking OSU to wins over higher seeded team Tennessee, Oklahoma State and most recently Loyola-Chicago. The one common theme during their postseason run is playing as an underdog. The Beavers have been a solid bet even before their recent hot streak. They are 13-1 ATS over their last 14 games and they are 21-9-1 ATS for the season.

It’s not quite the Phi Slama Jama days of the 1980s when the Cougars last visited the Elite Eight. But this team is conjuring up memories and is looking to do something the Clyde Drexler and Hakeem Olajuwon-led teams never did – win an NCAA Championship. While the team that made three straight trips to the Final Four was built on speed and offense, this year’s club is doing it with one of the stingiest defenses in college basketball. Houston has the No. 1 field goal percentage defense and allows the second-fewest points at 57.6 per game. Houston has benefitted from its bracket facing double-digit seeds in each game. And they get another with the No. 12 Beavers up next. Still, you have to take advantage of the opportunity and the Cougars have done just that. Their winning streak reached 10 with a 62-46 payout over Syracuse putting them at 7-3 ATS in that span.

They certainly aren’t feeling the pressure since they weren’t even supposed to be in this position. Picked to finish last in the Pac-12 the Beavers are using the symmetry of their No. 12 seed to dispose of opponents. While most outsiders consider it an unlikely run, the Beavers believed even if the regular season results weren’t there. “I think even during the regular season going into a game we’re pretty confident in our abilities as a team,” Ethan Thompson said.

Thompson should be doing the talking since his play on the court has inspired OSU. He scored 22 against the Ramblers, including a pair of free throws late that iced the victory, and is averaging over 20 points during the Tournament. OSU plays its own brand of smothering defense holding Loyola to 33 percent shooting in the 65-58 triumph.

While Houston’s defense has been among the best in the country all season and has risen to the occasion in Indianapolis, the offense needs to break out sooner rather than later to keep the Cougars playing. In a Sweet 16 matchup of great defenses it was Houston prevailing over Syracuse, 62-46, but the offensive weaknesses are something Oregon State can take advantage of. The Cougars won despite shooting 38.3 percent overall and 26.9 percent from deep. Staying locked in defensively is what allowed them to get the payout.

DeJon Jarreau will get a chance to shut down Thompson in this matchup. He did a nice job defending Buddy Boeheim in the previous game and still had enough to contribute nine points, eight rebounds and eight assists. The Cougars improved the country’s best field goal percentage defense holding the Orange to just 28 percent overall and 5 of 23 from three-point range.

This should be a brawl between teams that play smothering defense. Houston has had the benefit of playing in a favorable bracket and they get another double-digit seed. However, the Beavers don’t fit the mold of a 12-seed, not now at least after marching through the postseason. The longer they play the more confident they get, which is why I’ll take the Beavers and the points.