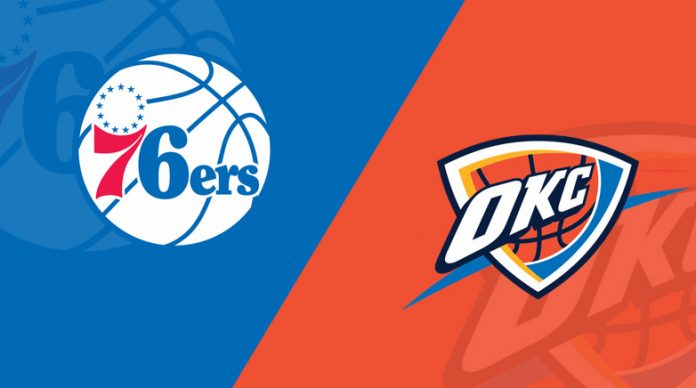 The Philadelphia 76ers went all in at the trade deadline with the acquisition of Tobias Harris. They made another huge move earlier in the season by trading for Jimmy Butler in a couple of deals intended to complete the process. What they didn’t count on was an injury to Joel Embiid, who is expected to miss at least a few games with a sore knee.

Embiid’s absence is welcome news to the Oklahoma City Thunder, who will look to break a two-game losing streak when they host Philly on Thursday. OKC was tearing it up with 10 wins in 11 games to make a three-team race in the West. However, a loss to the Pelicans before the All-Star break began a stretch of three losses in four games.

We’re still waiting to see how the Sixers new starting lineup is going to work together. We had brief glimpses and the results were mixed. Now we’re going to have to wait a little longer until Embiid is cleared to play. He hasn’t played since the break and the Sixers are 2-1. Wins over Miami and New Orleans were by a combined five points and the loss was a 15-point pounding by Portland at home.

OKC will look to end a mini-slide with the recovery from a marathon double overtime win over Utah in the rear-view. The Thunder outlasted the Jazz, 148-147, only to succumb to Sacramento the next night. OKC fell to Denver the last time out in a battle between two of the top three teams in the Western Conference. OKC is 38-22 overall this season and had a stretch where they won 10 of 11 games before the current skid and they are currently No. 3 in the West.

Injuries on Both Sides

It’s not like the Sixers haven’t played without Embiid before, so they should be used to it by now. But with the past ailments seemingly behind him and no limit on his minutes, Embiid is putting together a monstrous campaign. He averages 27.3 points per game and 13.5 rebounds while swatting nearly two opponent shots a night. That’s production you can’t replace with someone off the bench.

The Sixers will also be without backup center Boban Marjanovic, who crumbled to the floor the other day in a win over New Orleans. The absence of their two post players will likely impact the Sixers’ ability to rebound the basketball and effectively stop Westbrook’s drives to the hoop. It also opens up the middle for Steven Adams to have a big game.

OKC would rather bomb away and outscore teams with Russell Westbrook and Paul George. They are a middle-of-the pack defensive club allowing just over 111 points per game to rank 14th in the Association. And that part of their game has been overlooked during the recent slump. Over the last four games the Thunder have surrendered an average of 129.5 points per game with no fewer than 119 scored against them.

There was that double-overtime game where Utah scored 147 points to skew the numbers a bit. But through four quarters the Jazz had 129 points, suggesting OKC was still lagging on the defensive end.

We will miss the theatrics between Russ and Embiid with Philly’s big man sidelined. When the Thunder beat the Sixers earlier this season, the two exchanged words after Westbrook was fouled in a manner he didn’t like. So instead of waiting for fireworks between those two, we should get a game where both teams are looking to adjust and, of course, win. The absence of Embiid is just too noticeable and OKC will look to exploit that void. Russ and PG13 will score, and Adams is going to be the X-factor. If he can control the paint the Thunder should prevail, and you can expect an abundance of points to go on the board.

Check out the latest NBA betting lines and odds for today.