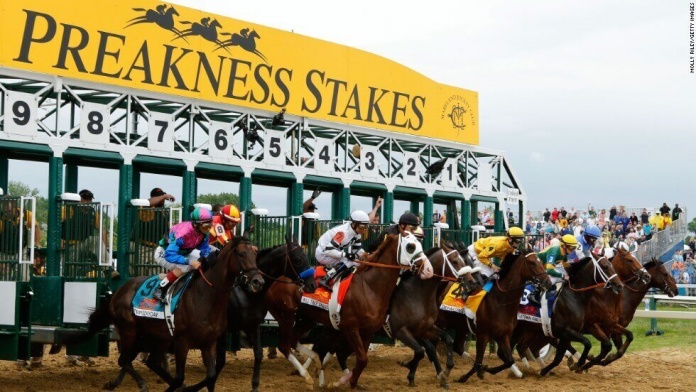 Is there any horse out there with a legitimate chance to keep Nyquist from heading to the Belmont Stakes with a shot of winning the Triple Crown for the second year in a row? It certainly doesn’t seem that way, as the Kentucky Derby winner has been lined as a 3-to-5 morning line favorite to claim the Preakness Stakes.

Check out our top Preakness picks and post positions for the 2016 Preakness Stakes race.

Cherry Wine was one of the alternate entries at the Kentucky Derby, and the fact that he didn’t ultimately run might be a blessing for him here at the Preakness Stakes.

We won’t find out until the last couple furlongs, because that’s when this colt is going to do his best work. The knock on Cherry Wine? He needed five tries to break his maiden, and he was rather disappointing finishing third at the Blue Grass Stakes.

Exaggerator knows all about Uncle Lino, as these two matched wits with one another in California all spring long. Of course, Uncle Lino was definitively no more than the third best horse to race at Santa Anita this year, but his last start, a 109 Beyer Speed Rating at the California Chrome Stakes the weekend before the Derby, will certainly turn some heads.

A perfect post for the Kentucky Derby winner. He’s far enough to the inside to know that he should be no worse than second from the rail at the first turn, and the rest of his challengers for early position are far to his outside. There’s no doubt that, barring a screwy start, Nyquist will be positioned well by Mario Gutierrez, and at this point, it would be relatively shocking if he didn’t win the Preakness Stakes.

It’s too bad that Awesome Speed doesn’t exactly have awesome speed. Sure, he’s going to try to come out of the blocks on the lead, but he wasn’t able to do it twice in his career.

He finished seventh in his first maiden effort, and he was fourth best, 13 lengths off the pace of Mohaymen at the Fountain of Youth Stakes. The only reason Awesome Speed is here is because he beat Governor Malibu due to DQ in the Federico Tesio Stakes.

There’s no doubt that Exaggerator was game for Nyquist in the Kentucky Derby, but all of the traffic really hurt his efforts at the wire. He just didn’t get up to challenge early enough.

That shouldn’t be a big problem in the Preakness horse racing, as the field has nine fewer entrants in it, and that could make a big difference. If there’s a horse here who can beat out the Derby champ, Exaggerator should be the one, but he’s going to have to do so from well off the pace.

What a wild card Lani is! He acted up before getting into the gate at the Kentucky Derby, got a poor start, and never really got into a position to challenge. He finished ninth though, and that was enough to give his Japanese contention enough motivation to bring him to the Preakness Stakes. It’s easy to wonder though if Lani is just purely overmatched running on this side of the pond.

Collected is peaking at the right time for sure. He won the Lexington Stakes for his second win in a row, but the big problem he’s got is that he’s going to try to run the exact same race Nyquist is going to run right off the pace. He was good enough to outduel a poorer field at the Lexington, but this is much different up against the big boys.

If there was one horse which really needed an inside post, it’s Laoban. He didn’t get it. The only shot this pony has of hitting the board is to race out of the blocks and get to the rail before the first turn, something that is incredibly hard for outside colts at Pimlico with as quickly as that first turn comes up.

Laoban has run terribly when he’s been off the pace, and we think this is a colt that just flat out doesn’t like dirt kicked in his face. That’s bad news against a field of 11 with a ton of other quicker starters in it.

The late entrant into the Preakness has won five races in a row, but we have a feeling there’s a reason he’s run 11 times in his career and really has never challenged any of the big boys. This is his first graded stakes race, and it’s the first time he’s being stretched beyond 1 1/16 miles. It’s a big ask of Abiding Star to win the Preakness.

We’ll have to keep a close eye on how Fellowship looks in his final training sessions leading into the Preakness. He was one of the best horses at Churchill Downs in terms of workouts, but we’ve seen this before leading into other big races without good results for Fellowship. In five races as a three-year old, Fellowship hasn’t finished better than third one time.

Perhaps the trendiest horse in the field. Stradivari was lined at 30 to 1 to win the Preakness Stakes at BookMaker Sportsbook‘s horse racing odds just a handful of days ago. That line was always far too long, but the moment this horse is garnering from bettors is astounding.

Sure, Stradivari won his last two races by 11 and 14 lengths respectively, but it’s not like he was up against the crème de la crème of three-year old horse racing. Still, if Todd Pletcher is bringing a horse like this here, he’s doing so with the purpose of ending the Triple Crown bid, and that’s why so many are trusting Stradivari. He’s got a really tough post on the outside though, and that will have us shying away from him come Saturday.

The 2016 Preakness Stakes will head to post at 6:18 p.m. ET on Saturday, May 21. All of the action from Pimlico Race Course can be seen live on NBC.