Home Latest News UFC Underdogs You Should Bet on Now 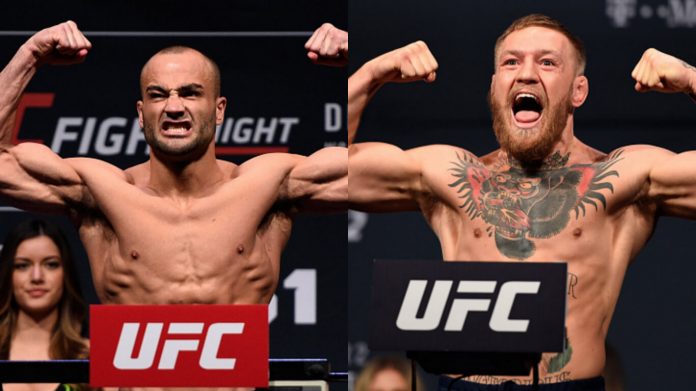 The cancellation of UFC Fight Night in Manila gave us an unexpected monthlong break from any UFC events. But while fight fans are waiting for the action to resume next week at UFC Fight Night 98, savvy gamblers are taking the time look for live underdogs on upcoming fights.

Don’t let favorable UFC odds get away from you during fight week betting. For example, take Holly Holm’s upset over Ronda Rousey. Holm’s best money line was +700, but she closed at +450. Betting earlier could have been a $250 net positive for every $100 you bet. For bigger bets, that could end up being thousands.

It’s not just that Ferguson has won eight straight in the UFC’s deepest division. Or the fact that he has endless cardio, blinding hand speed and a chin made out of iron. It’s his balls-to-the-wall style that makes me a believer.

He makes crazy work inside the octagon, and that’s something that’s impossible to prepare for. Want a more concrete reason? Ferguson is three inches taller and fights even longer with a variety of snappy kicks.

Rashid Magomedov has got a flashy 19-1 pro record, and has won all four fights inside the octagon. But Dariush is a nine fight UFC veteran who has faced a much higher caliber of competition, punctuated with wins over Jim Miller and Michael Johnson.

Both are high level wrestlers, and it’s difficult to tell who really has an advantage. This should be a toss-up, which is why you should favor the underdog in UFC betting.

According to OddsShark, Eddie Alvarez is one of the best underdogs in all of MMA. He closed as an underdog in his past five fights and posted a 4-1 record against the MMA odds. In three of those, “The Underground King” was +185 or higher.

For the record, I think McGregor will win. But if Alvarez’ line gets anywhere close to +150, you could easily talk me into betting on him to wrestlehump McGregor for five rounds.

Any time Yoel Romero is an underdog, you’ve got to consider betting on him. The top four middleweights (not including Bisping) are a bunch that could all beat each other on any given day. Plus, Weidman has dealt with so many injuries in recent years we really don’t know if he’s the same fighter that won the belt.

DC is 37 years old. Sure, he hasn’t shown any signs of physical decline yet, but he’s facing a guy that is the scariest puncher since Chuck Liddell.

Johnson is hitting his peak right now, and we’ve seen him flummox wrestlers like Phil Davis before. It only takes a few successful sprawls before this fight tilts frighteningly in Rumble’s favor.

There are too many factors against Rousey here. First, she was demolished in the standup by Holly Holm and now faces the division’s best Muay Thai striker. Second, it will have been over a year since she has fought by the time she meets Nunes.

Third, fighters under Edmond Tarverdyan’s tutelage do not evolve. Fourth, Nunes is also a BJJ black belt who knows how to defend arm bars, just in case Ronda goes back to the skills that led to her dominant title run.

As always, we’ll have detailed predictions for every fight listed during fight week. But don’t be surprised if the odds dramatically swing in that time. It’s always a good idea to lock in your bets ahead of time.

For more UFC news, be sure to check out 3 Crazy UFC Money Fights We All Hope Pan Out