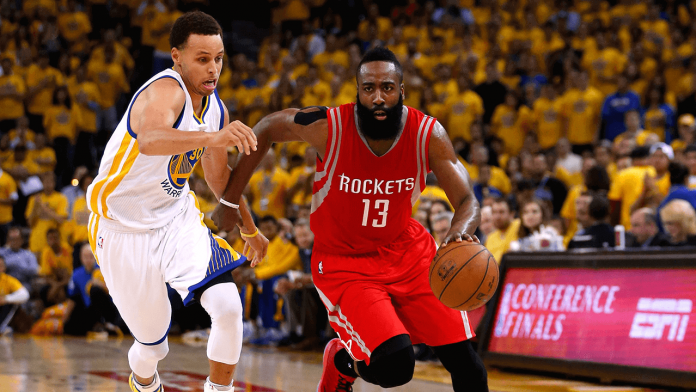 The Golden State Warriors and Cleveland Cavaliers have work to do in the conference championships if they want to meet in the Finals for a fourth consecutive season. Opening a playoff series on the road for the first time since 2014, the Warriors did what they wanted and split the first two games in Houston to steal home court advantage. However, the Rockets showed why they were the best team during the regular season with a 22-point Game 2 victory.

The matchup out west between the top two teams is the one everyone wanted to see and they didn’t disappoint in the first two games. Each club collected a lopsided victory and we expect to see things tighten up. But with offensive firepower on each side, we may see more of the same when the teams meet for Game 3 in NorCal on Sunday. There was a pair of convincing victories in the East final as well, only the Boston Celtics were on the winning side both times. Boston has never lost a series when up 2-0 and they’re looking to end the reign of the King in the East.

You don’t often see the Warriors get trampled like they did in Game 2 and the Rockets played with a purpose. Looking to avoid getting swept at home, Houston played its finest game of the postseason in a 127-105 win on Wednesday. The Rockets made the proper adjustments and executed their game plan, making 16 three-pointers and getting double figures in points from five players to hand the Dubs their worst playoff loss since 2016. And they did it with James Harden having an off-night. No problem, up stepped P.J. Tucker hitting 5 of 6 triples for 22 points and Eric Gordon dropped 6 of 9 threes for 27 points. And the defense was a story, too. The Rockets held the Dubs to 30 percent three-point shooting while forcing 15 turnovers.

After taking Game 1, the Dubs might have relaxed just a tad knowing they stole homecourt. And that was the opening the Rockets needed. Kevin Durant did his best scoring 38 points in Game 2 after dropping 37 in the opener. Unlike Game 1, KD got little help and the Warriors were stymied when trying to put together one of their patented second half runs. The Warriors could use a little Stephen Curry to help them overcome the Rockets. The two-time MVP scored 18 points in the opener and had 16 in Game 2 while going a combined 2 of 13 from behind the arc. The Dubs have yet to lose at Oracle this postseason going 6-0, however they are just 3-3 ATS.

Playing in a conference final for the first time, Chris Paul has been spectacular. But there was reason for concern when he limped off the floor in the fourth quarter of Wednesday night’s game. Paul received treatment on the bench and had his lower leg wrapped in ice when he exited for good with the Rockets up big. A team source said he’s fine, but given CP3’s injury history it’s still something worth keeping an eye on. The Rockets caught a break in the schedule with a few extra days before Game 3 and that is likely enough time for Paul to recover.

Will we see a close game in the series? My guess is yes, and it happens on Sunday. The Rockets were the best road team in the Association during the regular season, and they won their only visit to Oracle, knocking off the Dubs in the season opener. They won’t be intimidated by the raucous environment and they know they can play with the Dubs without making changes to their game plan. They won’t get the performance from Tucker like they got in Game 2, but Harden should make up for that. I like the visitors to cover the spread and if Paul is healthy, they could pull off the upset.