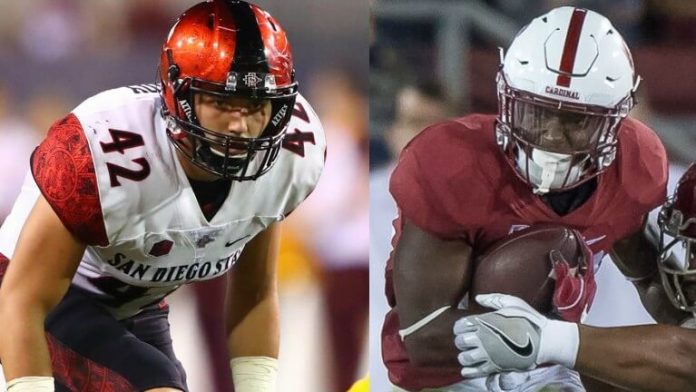 The San Diego State Aztecs won 10 games a year ago, including an upset of this very Stanford team. However, starting the season strong won’t be as easy. The Aztecs lost star running back Rashaad Penny to the NFL, as he was chosen in the first round of the draft by the Seahawks. The Cardinal are on the short list of teams expected to contend in the Pac-12 this season, and while this is not a conference game, it could be a good barometer of Stanford’s strength.

The San Diego State Aztecs and Stanford Cardinal will face off on Friday, August 31st, 2018 at 9 p.m. ET at Stanford Stadium in Palo Alto, California. The game will be nationally televised on FS1.

Stanford is listed as a 14.5-point favorite as San Diego State’s loss of key personnel and the change in location has the oddsmakers believing the Cardinals will win this one comfortably.

The Aztecs hosted Stanford in mid-September a season ago. Even though the Cardinals was ranked No. 19 in the country, San Diego State came away with the 20-17 victory. Quarterback Christian Chapman found David Wells on an 8-yard touchdown pass with 54 seconds remaining to give the Aztecs the comeback win.

Penny carried the ball 32 times for 175 yards and a touchdown. Stanford running back Bryce Love was even better, rushing 13 times for an incredible 184 yards and two scores. However, the Cardinal got nothing out of its passing game, as Keller Chryst completed 9-of-20 passes for 72 yards with a pair of interceptions.

The dominant performance against the Aztecs was a harbinger of things to come for the Stanford running back in 2017. Love finished the season with 263 carries for 2,118 yards and 19 touchdowns. Love averaged a robust 8.1 yards per carry a season ago and enters 2018 as one of the front-runners for the Heisman Trophy.

His presence is one of the main reasons Stanford is the team to beat in this matchup. San Diego State can’t let him run wild because the Aztecs have to expect the Stanford passing game will be better this year.

San Diego State is a solid program and even without Penny the team’s running game should remain strong. However, Stanford has the better team this year as well as the home field advantage. Take the Cardinal to capture this victory, but the spread is too high.